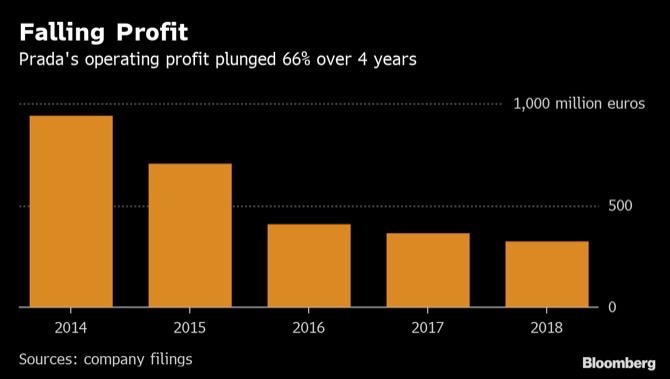 Prada SpA shares fell to the lowest close since 2016 as slower Chinese spending contributed to an unexpected drop in the Italian fashion house’s annual profit.

The Hong Kong-listed luxury group attributed a slump in Asia mostly to Chinese tourists reining in spending in Hong Kong and Macau because of the weakness in the yuan. Other luxury brands, including Kering SA’s Gucci, have seen the impact of softer buying by Chinese tourists offset by increased spending on the mainland, but Prada failed to get a similar boost from Chinese spending at home, said Citigroup analysts led by Thomas Chauvet.

Prada’s China sales were flat for the year, a “significant swing” after a first-half gain of 17 percent, Citigroup said. Yesterday’s stock plunge after the disappointing earnings shaved USD864 million off the company’s market value.

Chinese consumers have turned more cautious amid the slowest economic expansion in almost three decades and a trade war with the U.S. While cars and iPhones have seen bigger slumps so far, Prada’s results could spark worry that China’s newly wealthy middle class is scaling back on high-end purchases. For an industry that relies on Chinese demand for 30 percent of $1 trillion in global luxury spending, that’s a chilling prospect.

Kering shares, which have bounced back since jitters over the state of the Chinese consumer emerged last autumn, were up 0.6 percent early yesterday in Paris. Louis Vuitton owner LVMH was down 0.3 percent.

Prada’s operating profit declined 10 percent to 323.8 million euros, falling short of the 378 million euros predicted by analysts. The shares slumped 11 percent in Hong Kong yesterday, the biggest one-day drop since September 2017. The stock has lost 38 percent over the past year.

“We haven’t seen significant recovery in its China sales during the first two months this year after a weak fourth quarter in 2018,” Woo said. “We still expect the business improvement for Prada will be slower than peers in 2019, as it takes time for the brand to upgrade its product design and retail operations in the country.”

Prada has seen its earnings tumble for four straight years, falling more than 50 percent since their 2014 peak as the group raised handbag prices and took too long to come up with products to follow up its best-selling Galleria line.

This year, however, revenue returned to growth as the brand rolled out new handbags like the $3,000 Sidonie shoulder bag and fresh shapes in its more affordable black nylon that helped win the favor of younger shoppers. But the cost of investing in e-commerce and social media as well as staging pop-up stores and parties to reignite interest in the brand all incurred additional costs. Daniela Wei & Robert Williams, Bloomberg