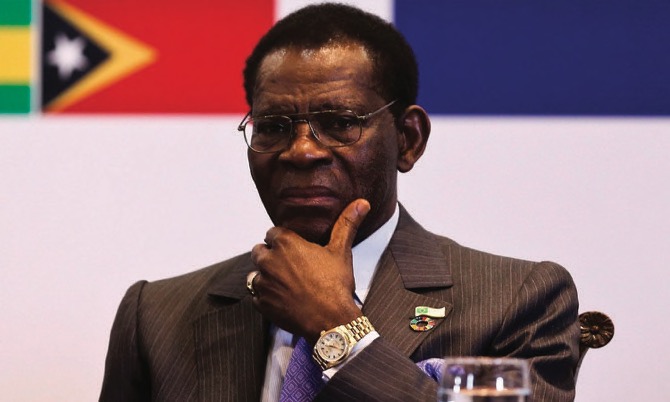 Obiang acknowledged China was the “positive” exception to support his country, “as we are facing many difficulties in attracting investment and financing to diversify the economy.”

The President of Equatorial Guinea noted that conferences to attract foreign companies to invest in the country “have had little success,” as had contacts with foreign governments to secure aid.

“The exception is the government of China, which has granted us a very large loan of USD2 billion,” he said.

This loan does not generate debt for the state, Obiang said, “because it is in a parallel account with a Chinese bank that we are [honoring] to the best of our ability,” he said.

In the interview, the President of Equatorial Guinea, who has been in power for 40 years (making him the longest standing head of state in Africa) said that his government is a good payer and has no debts to foreign companies.

His government, he said, is negotiating a technical advisory with the International Monetary Fund to try to avoid the possible devaluation of the national currency and to balance the State Budget.

In 2015, the Times, citing diplomatic sources, said Equatorial Guinea wanted to join Forum Macau and “apparently it has China’s blessing.”

At the time, Equatorial Guinea was about to celebrate its first anniversary as a member of the Community of Portuguese Speaking Countries (CPLP) in July. The west central African country, with a population of 1.6 million, is becoming a magnet for Chinese investment in Africa.

According to our sources, “other countries in Africa” are willing to join Forum Macau, even though they are not part of the CPLP. “We are talking about countries that claim to have Portuguese influence in the past,” the diplomat said to MDT back then, and that the language issue “was no barrier.”

The Equatorial Guinea’s membership has added nearly $20 billion to the combined GDP of the CPLP bloc, which currently represents close to 4 percent of the world total, and is expected to continue growing. PC/Macauhub