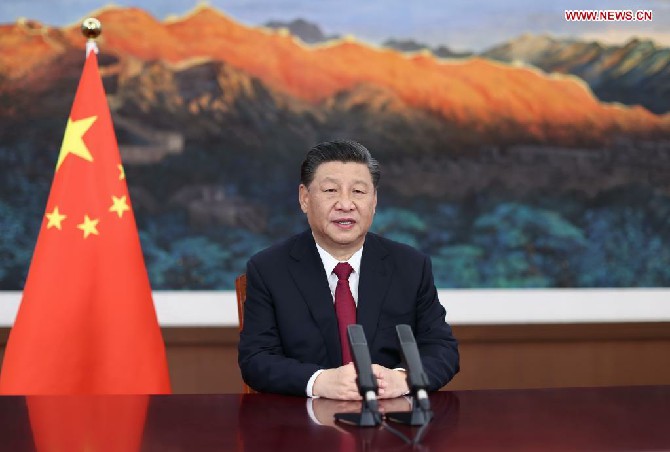 Chinese President Xi Jinping has called for a concerted effort from all countries in Asia and beyond to combat the pandemic and drive post-Covid economic recovery, and also warned against any decoupling moves that may be made by some countries.
Xi delivered the remarks yesterday in his opening speech via a pre-recorded video message to more than 2,000 officials and commercial luminaries who attended the high-profile Boao Forum in Hainan.
Xi warned that “attempts to ‘erect walls’ or ‘decouple’ run counter to the law of economics and market principles. They would hurt others’ interests without benefiting oneself.”
“We must not let the rules set by one or a few countries be imposed on others, or allow unilateralism pursued by certain countries to set the pace for the whole world,” Xi stressed.
For international relations, Xi called for “equality, mutual respect and mutual trust,” and urged some countries to stop “bossing others around or meddling in others’ internal affairs.”
Many believe that Xi’s thought-provoking speech was alluding to the U.S. and its allies.
Before the release of Xi’s statement, the U.S. President Joe Biden and Japanese Prime Minister Yoshihide Suga jointly issued a statement after their meeting at the White House last Friday, stating that they both “shared their concerns over Chinese activities that are inconsistent with the international rules-based order, including the use of economic and other forms of coercion.”
The Chinese government later retaliated and denounced the move as “harmful” and “stoking division,” and said it had “gone far beyond the scope of [the] normal development of bilateral relations.”
Earlier, at the opening ceremony of Macau’s fourth National Security Education Exhibition on April 15, Fu Ziying, director of Liaison Office of the Central People’s Government in the Macau SAR, said that the world is facing unprecedented changes this century. The intensified moves by the U.S. and some Western countries to hinder China’s development are among them.
This year’s Boao Forum for Asia Annual Conference 2021 in Hainan lasts four days from April 18 to 21, and is themed “A World in Change: Join Hands to Strengthen Global Governance and Advance Belt and Road Cooperation.”
Macau’s Chief Executive Ho Iat Seng led a delegation to participate in the Boao Forum in Hainan, which took place for part of the conference, from April 19 to 20.
Since its founding in 2001, the annual Boao Forum for Asia has been a high-profile event, bringing together international political and economic elites to examine harmonious approaches to driving global development.

Macau’s Chief Executive (CE) Ho Iat Seng and key officials of Hainan Province met on April 19 at the Boao Forum to discuss opportunities to pursue a closer partnership between the two cities in several areas.
During the meeting with Shen Xiaoming, the Secretary of the Hainan Provincial Committee of the Communist Party of China (CPC), Ho affirmed that there is “[significant] room for cooperation” between Macau and Hainan in industries such as tourism, education, and science and technology.
Tourism should be a key point of future collaboration, since the flight time between the two places is relatively short, Ho stressed.
Furthermore, Ho reaffirmed his commitment to advancing Macau’s economic diversification by concentrating on the cultivation of four major sectors, namely traditional Chinese medicine; modern financial and insurance services; advanced and new technology development; and culture-related sectors.
In response to Ho’s suggestion, Shen pledged to work more closely with Macau, in a bid to bolster cooperation with Portuguese-speaking countries, governmental and people-to-people exchanges, and promoting multi-destination tourism.