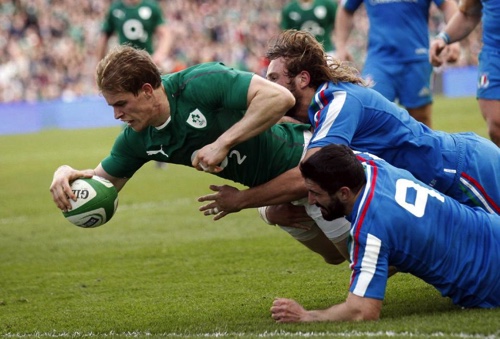 For Irish rugby, it turns out there is life after Brian O’Driscoll.
The international retirement of O’Driscoll following Ireland’s title success in last year’s Six Nations left a major hole in the national team. How would it cope without the great center, one of the country’s greatest ever servants?
There was no need to worry. Ireland has won every game since, including four in a row against giants from the southern hemisphere’s Rugby Championship, and is the team to beat in the 2015 Six Nations that starts on Friday with an eagerly anticipated clash between fierce rivals Wales and England in Cardiff.
A typically unpredictable tournament — there have been four different winners in the last five years — again appears wide open, however, with Europe’s finest on a high after a strong set of results against their southern hemisphere counterparts in the recent November tests.
An argument could be made for France, England and Wales winning the last Six Nations before the Rugby World Cup in September, while Scotland looks to have improved immeasurably under new coach Vern Cotter. Italy, once again, is the rank outsider and favorite for a fifth wooden spoon in seven editions.
It’s tough to look beyond Ireland as champion, though, and the fixture list helps.
Joe Schmidt’s team, which did the double over Argentina last summer and then beat South Africa and Australia in November to stretch its winning run to seven tests, is at home to France and England and has away games against Italy and Scotland. Its other away match, against Wales in Round 4, is the toughest fixture and could prove to be the title decider.
Ireland’s gnarly pack, led by lock Paul O’Connell, continues to give the team’s back division a strong platform that flyhalf Jonathan Sexton rarely wastes.
“Ireland are probably the best team in the northern hemisphere,” said Italy captain Sergio Parisse, whose side hosts the holders on Saturday. “They are a very complete team.”
Ireland’s injury situation was looking bleak two weeks ago, but has cleared up at just the right time. Four likely starting backs — Sexton, scrumhalf Conor Murray, center Robbie Henshaw, and winger Dave Kearney — have been sidelined but were selected Sunday in the squad for the first two matches. Prop Cian Healy and star flanker Sean O’Brien have also recently returned from injury.
With a home World Cup looming, England will be looking to assert itself and win the Six Nations for the first time under Stuart Lancaster.
The English have great strength in depth, and pride in the shirt has been regained in Lancaster’s tenure, but the team still appears a work in progress, and doubts remain about the best composition in the back row and at half back. George Ford is the new man at No. 10 in place of Owen Farrell, who is one of a slew of injury absentees that includes lock Joe Launchbury, No. 8 Ben Morgan and center Manu Tuilagi.
Much will depend on how the English get on in the tournament opener at Millennium Stadium, where they were smashed 30-3 in a title decider two years ago.
“We learned a lot from that game and we have come a long way in terms of composure,” England forwards coach Graham Rowntree said.
Injury-wise, Wales has the most stable squad heading into the tournament, and the November win over South Africa, which ended a 22-match losing run against the southern hemisphere’s big three, will have done wonders for confidence.
“This squad are in the middle of a cycle I think,” coach Warren Gatland said. “A lot of this team should still be together for the next four or five years. It’s a healthy position to be in, in terms of being excited about the Six Nations.”
France coach Philippe Saint-Andre was asked at last week’s tournament launch what to expect from his team over the next two months. “To be honest,” he said, “I have no idea.”
And there lies the problem for the mercurial French. The time has come for Saint-Andre to stop tinkering and lay the foundations for a World Cup campaign by picking a settled side in the Six Nations. But this is France, and experimentation is a hard habit to break.
The star player remains Wesley Fofana, a destructive runner in midfield, but whether France’s pack can dominate games the way it used to is doubtful.
And will this be the year Scotland turns from being a plucky hopeful to a genuine contender? Impressive wins over Argentina and Tonga in November, combined with a narrow loss to New Zealand, suggest the highly rated Cotter is building something to savor at Murrayfield. Steve Douglas, AP Sports Write, AP