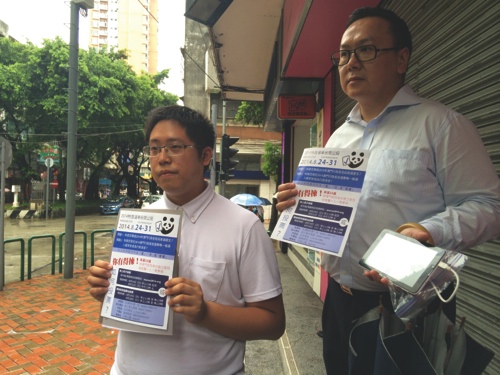 The civil referendum launched by three pro-democracy groups is set to hit Macau’s streets after all, but organizers will be resorting to an entirely electronic voting method. Jason Chao, president of the Open Macau Society, unveiled the group’s contingency plan yesterday, revealing that several volunteers will collect votes in five locations across the city using tablet devices.
Whilst attempting to launch an unofficial referendum on universal suffrage, the three pro-democracy groups faced another set-
back this week when the Court of Final Instance (TUI) decided against the placement of polling stations in public areas.
The Civic and Municipal Affairs Bureau (IACM) had previously refused their request to set up polling stations in the streets, which prevents referendum organizers from placing any materials related to the ballot in public areas.
Since polls and voting bulletins are out of question, they will be resorting to tablets, which citizens may use to vote.
Jason Chao clarified that, therefore, both online and in person voting options will be made available, but stressed that they “will go paperless.”
“When a [possible] voter comes to us, we will verify whether the person has already voted online. After ID verification, we will hand the tablet to the person, so that she/he can make their choice. Then, they will hand back the tablet and we will return their identification document,” he explained.
Between August 24 and 30, volunteers will spread out across five locations in town to collect citizens’ votes. These include: the Avenida Horta e Costa, in front of Bank of China and near Café Coral; Rua de São Lourenço, in front of McDonald’s; Rua do Campo (near the Public Administration Building); Rua 1 do Bairro Iao Hon, in the Northern district; and near Flower City Garden in Taipa.
Jason Chao told reporters that about six or seven volunteers are set to work in each location.
The groups’ Plan B after a series of setbacks has both its advantages and its challenges, said Jason Chao. “It’s challenging for us, but this completely electronic plan has a benefit: we won’t have a manual vote counting process. Votes can be counted directly using the computer service,” he explained.
Jason Chao is confident that the authorities will not impede the groups’ activities. “[The court’s] ruling states clearly that citizens may do all activities that are not prohibited by law – it means we can do it,” he stressed.
Jason Chao added he could not find any laws impeding their contingency plan. “What we will be doing does not involve placing [polling station] materials in the streets, in the same way as we conducted our referendum promotional activities without setting up any materials [within public places],” he stressed.
The political activist made the assurance that citizens will be able to easily identify civil referendum volunteers, but urged people to pay attention to their logos, because another group, headed by Lei Kin Iun, will be launching a public vote on the same dates and in similar locations.
Jason Chao has said they will disclose further details as to how citizens may easily identify volunteers this Friday. Also on Friday, the Open Macau Society is submitting a declaration for the processing of personal data within the Office for Personal Data Protection (GPDP). “Our operation will be [carried out] in compliance with existing laws governing the processing of personal data (…) Citizens’ personal data will be safe with us,” he guaranteed.
Jason Chao has explained that after voting and vote counting procedures end, the personal data of voters will be deleted, “so that nobody will be able to recover it and know who voted [in the referendum].”
Organizers expect that 5,000 people will participate in the ballot, which addresses the following questions: “Should the Chief Executive of Macau be elected through universal suffrage in 2019?” and “Are you confident in the unchallenged candidate running for the Chief Executive election in 2014?”
Jason Chao said that if over 5,000 citizens vote in the civil referendum, it means that their poll is more representative of the population than the Chief Executive election, since only 5,000 people voted to elect the 400 members of the Electoral College, which ultimately elects the next Chief Executive.
The results for the first question and the referendum turnout will be released on August 31, the day of the Chief Executive election. Results regarding motion two will be presented on September 2.
The Open Macau Society, Macau Youth Dynamics and Macau Conscience joined forces to launch a civil referendum gauging Macau’s desire for democracy.