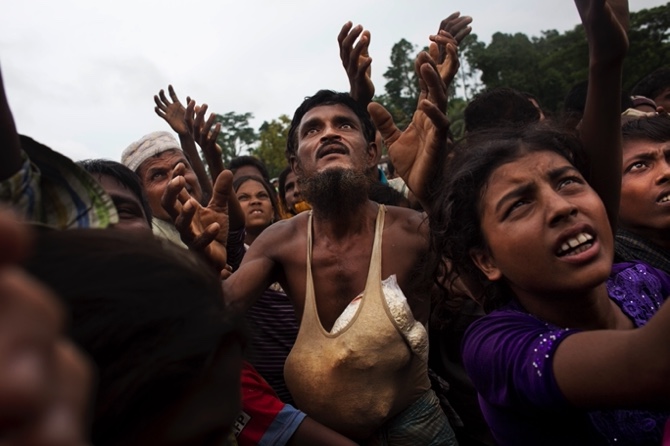 A Rohingya man stretches his arms out for food distributed by local volunteers, with bags of puffed rice stuffed into his vest at Kutupalongin 2017

Bangladesh’s prime minister said that the prolonged stay of more than 1 million Rohingya refugees in crowded camps in the country has become a serious security and stability concern.

“Apart from their own miseries, their prolonged presence is causing a serious impact on the economy, environment, security and sociopolitical stability of Bangladesh,” Prime Minister Sheikh Hasina said at the opening ceremony of a three-day meeting of military officials from 24 countries in the Indo-Pacific region.

The United States is the co-host of the gathering, called the Indo-Pacific Armies Management Seminar, along with the Bangladesh army.

While the militaries of the participating countries are discussing disaster management, transnational crime, security issues and women’s empowerment, Bangladesh is using the platform to highlight the issue of Rohingya refugees who have fled from violence in Myanmar.

Ahmed said the military leaders are being taken to the camps in Cox’s Bazar district to give them “a clear perception” of the gravity of the refugee crisis and why their repatriation to Myanmar is necessary.

Last month, the refugees marked the fifth anniversary of a mass exodus of more than 700,000 Rohingya into Bangladesh who were fleeing a harsh crackdown by Myanmar’s military. In total, Bangladesh is hosting more than 1 million Rohingya refugees.

Hasina has said that repatriation is the only solution to the crisis, but that Bangladesh would not force them to go back to Myanmar.

Bangladeshi officials have expressed frustration after at least two attempts to repatriate the refugees failed under a bilateral agreement brokered by China. The Muslim Rohingya have said that conditions remain too dangerous in Buddhist-majority Myanmar, where they face extensive discrimination.

Charles A. Flynn, commanding general of the U.S. Army Pacific, told reporters that he could not reply to policy questions such as how militaries can help repatriate the Rohingya to Myanmar, but thanked Bangladesh for arranging the trip for the delegation to the refugee camps.

“What I will say is this. I am thankful that the chief of the Bangladesh army has found a way in the program to bring us to Cox’s Bazar and to see the magnitude of the humanitarian assistance that Bangladesh has provided for five years to that situation,” he said.

The Rohingya crisis has gone to international courts, where Myanmar has denied any wrongdoing.

Last month, U.S. Secretary of State Antony Blinken said the U.S. remains “committed to advancing justice and accountability” for Rohingya and all people of Myanmar. MDT/AP