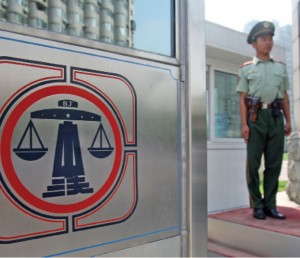 A former top official accused of taking bribes in return for government positions is under criminal investigation, Chinese prosecutors said yesterday, a day after he was expelled from the ruling Communist party and stripped of all government positions.
Su Rong, a former provincial party leader and former vice chairman of China’s top political advisory body, is one of the most senior officials to have fallen in President Xi Jinping’s sweeping anti-corruption drive.
Xi has warned that rampant corruption, if unaddressed, threatens the party’s rule. About 70 high-ranking officials have been implicated in Xi’s campaign, speaking not only to the severity of corruption but also the determination of Xi’s administration to root out the problem.
Last year, the public applauded when Xi took down Zhou Yongkang, a former member of the all-powerful standing committee of the party’s Political Bureau, over corruption charges. Zhou is the highest-ranking official, albert retired, to be snared in Xi’s campaign.
Su, 66, came under investigation last year when he was still serving as vice chairman of the Chinese People’s Political Consultative Congress, which makes his ouster remarkable.
Before he took the national position, Su had served as the provincial party chief for three provinces — Qinghai, Gansu and Jiangxi. That position has more power than that of a provincial governor.
The Central Commission for Discipline Inspection, the Communist Party’s top watchdog agency, said Monday in a written statement that Su violated party disciplines by altering decisions arbitrarily. The commission said Su also took “huge amounts of bribes” and, in turn, sought promotions for others and benefits for businesses.
The party agency said Su’s acts have caused significant losses in state assets and that he was responsible for severe corruption in Jiangxi.
The statement said the party has handed his case over to judicial authorities, who are likely to indict Su on charges of taking bribes and abusing public power.
China’s national prosecutors said yesterday they have started to investigate Su and placed limits on his freedom of movement. AP