Protest against soaring housing prices on eve of CE election 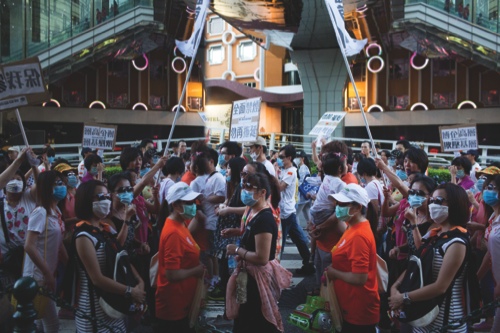 Gaming workers, reflected in a mirror, protest. Saturday’s event is being organized by an online group called “Guarding Macau People,” with strong links to the promoters of the recent casino workers rallies

Recent months have witnessed a wave of protests, and there seem to be more ahead. Feeling the pressure of soaring housing prices, residents are preparing a demonstration for this Saturday, on the eve of the Chief Executive election, demanding that more land should be reserved for residential usage.
The event is being promoted by an online group called “Guarding Macau People,” and is headed by Cloee Chao and Ieong Man Teng, both croupiers who took leading roles in the recent casino workers’ labor protests. Ieong is also the president of the Forefront of Macau Gaming, which has organized several petitions and rallies against casinos.
“Housing is a basic need for people. But apartment prices are too high for Macau’s people to afford. We hope that the government will reserve land [on which] to develop residential spaces, namely public housing units,” Cloee Chao told the Times yesterday.
She insisted that more land should be reserved for the construction of residential buildings, and that the authorities should not grant the limited land resources to “certain big families” for the construction of hotels and resorts.
“At present, the average salary for a croupier is MOP17,000. However an apartment in an old tenement without lifts costs more than MOP 3million, which means that we have to pay 1 million for the first installment (30 percent of the total cost). Who earns such a salary [and is able] to buy an apartment?” Chao demanded.
Chao said that she was lucky to be able to buy a unit 10 years ago, when the price was not so high. But her younger brother, who submitted an application for affordable housing 10 years ago, is still waiting for the apartment now.
Based on her friends’ experiences, most people who are unable to afford the housing prices have no choice but to live with their parents. “That means two or three families living in one apartment,” she said.
“One of my colleagues used to be a housewife and never looked for jobs. She lives with her two sons in a two-bedroom flat measuring around 300 to 400 square feet. The two sons shared a bunk bed in one bedroom when they were kids. But now they’re grownups and need to form their own families. So the mother has to work in a casino, in order to earn enough money to buy another apartment for her sons,” Chao recounted.
Having made the decision to hold the demonstration one day before the election of the new Chief Executive, the organizers have expressed the hope that the sole CE candidate will make a promise regarding the usage of land resources.
“We urge the government to take back the idle land as soon as possible and build residential units,” Ieong Man Teng declared.
Starting from Tap Seac Square at 3:30 p.m. on Saturday, the organizers estimate that around 1,000 – 2,000 people will join in the demonstration. “Most of them are from the lower-middle classes, who can’t afford to buy a house,” Chao said. The demonstration will end at the government headquarters, where representatives will deliver a petition. “Guarding Macau People” was established as an online group after the mass demonstration against the government’s perks bill in May.