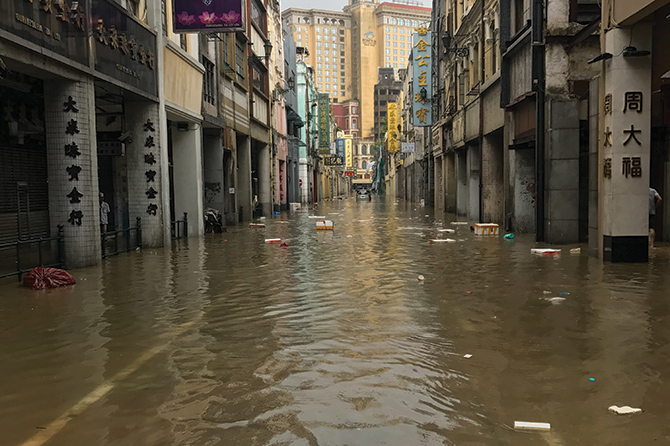 The 10 measures announced by the government that aim to fix or at least relieve the effects of severe storms and high tides have not yet moved forward to their implementation phase. The projects are stranded, awaiting further studies and analysis.

This is the major conclusion that came out from the latest meeting of the Follow-up Committee for Land Affairs and Public Concessions of the Legislative Assembly, held on Tuesday.

The acknowledgement was made after the meeting by the Committee president, lawmaker Ella Lei, who speaking with the media said there had been no advances in regards to these public works projects.

“Regarding the works for increasing the height of the walls, these are all [still] in the study phase or even preliminary study. We are aware of the risks to residents living in low-lying areas [but] some members of the committee are not satisfied with the replies from the Government,” Lei said, as quoted by Radio Macau.

The committee president took the opportunity to criticize the lack of communication between different government departments, and the lack of transparency regarding the plans and the timeline for their implementation.

“We call attention to the lack of coordination between the different services,” she said. “This issue is probably due to the lack of a mechanism for information disclosure [on the timetable for the execution of the works] so that at least the population can know what the government is going to do and what [is the current situation] in the event of a disaster.”

In the bundle of measures that the government presented as solutions to severe weather conditions – for example the flooding of low-lying areas of the peninsula and islands – were works such as the construction of flood barriers (levees). This includes in the Inner Harbor district, which the Marine and Water Bureau (DSAMA) acknowledged in October last year could only be done after 2021.
The DSAMA noted that analysis and scientific research on the flood prevention improvement measures had been concluded. It noted that for the time being, the works to be advanced would only include, “the installation of over 10 drain valves on the lower walls in the Inner Harbor,” which would be opened to facilitate faster water drainage after a storm surge accumulation.

According to the bureau, the installation of such valves would only be possible in the second half of this year.

As for the flood barriers, which are to be built between piers number 23 and 26, the DSAMA said in the same statement, “it can only be built after the conclusion of the construction works of the ‘Box-Culvert’ of the Rainwater Collection and Pumping Station of the Northern area of the Inner Harbor.” The work is expected to finish during 2021 and is included in the “mid-term measures.”

Citing the same research and analysis ordered by the government, the bureau said that the studies concluded that the solution of deepening the riverbed in the area would not contribute to solving the flooding problem.

The new concession contract for the renovation, update and operation of the Ká Hó Port has been already settled and the contract will be written  soon, the Secretary for Transport and Public Works, Raimundo do Rosário, said on the sidelines of the Follow-up Committee for Land Affairs and Public Concessions of the Legislative Assembly.

To the media, Rosário said that the new contract has no major changes from the previous one, and that the only relevant change relates to the transport of hazardous materials.

“Two or three years ago, the transport of dangerous products by road was banned. The major change was to find a way [together] with Macau port to ensure the entry of such materials, especially of fireworks and other products, by sea,” the secretary said in a report by Radio Macau. RM