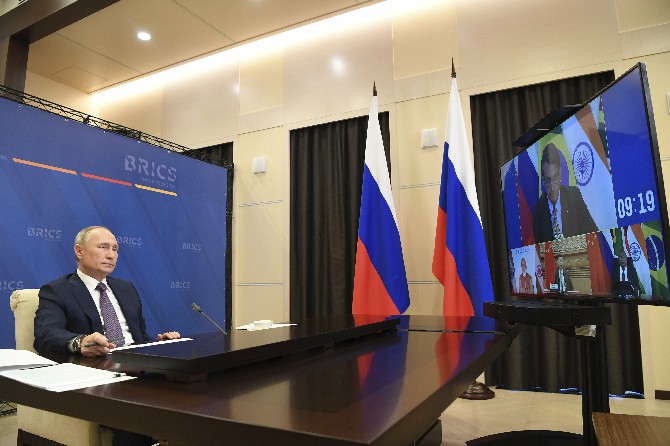 Vladimir Putin attends a meeting with BRICS leaders via video conference, in Moscow

Russian President Vladimir Putin told BRICS leaders yesterday [Macau time] that coronavirus vaccines developed in Russia “work effectively and safely” and urged the group of emerging economy nations to “join forces” for the mass production of the shots.
Putin’s remarks come after early results of large studies of several experimental COVID-19 vaccines, including a Russian one, were announced. The BRICS grouping is made up of Brazil, Russia, India, China and South Africa.
Moderna Inc. said Monday its vaccine appears to be 94.5% effective, according to preliminary data from an ongoing study. Last week, Pfizer Inc. said its own vaccine looked 90% effective.
Two days after the Pfizer announcement, developers of the Russian-made vaccine Sputnik V said early data from a large trial suggested the shots were 92% effective. However, the conclusion was based on a much lower number of infections recorded during the trial — 20 compared to 94 in Pfizer’s case and 95 in the study of Moderna’s vaccine.
Russia came under a wave of international criticism for giving Sputnik V regulatory approval in August, since the shots have yet to complete advanced studies among tens of thousands of people necessary to establish the vaccine’s safety and effectiveness. However, two months later, Russian authorities approved another jab after early stage studies.
Addressing the leaders of Brazil, India, China and South Africa at an online summit, Putin stressed that “coordinating collective BRICS measures” to tackle the pandemic is the alliance’s priority. He also said Russia was ready to cooperate with its BRICS partners “in the manufacturing and use” of the Russian-made vaccines.
“There are Russian vaccines — they work effectively and safely,” Putin said. “It is very important to join forces for the mass production of these products for wide circulation.”
The president noted that two different vaccines have been approved in Russia, and a third one was “in the works.”
The Russian Direct Investment Fund, which bankrolled the development of Sputnik V, has agreements with India and Brazil to conduct trials of the jab, and with pharmaceutical companies in India and China to produce it, Putin said.
“I think this is very important,” the Russian president added.
Other BRICS leaders also spoke about cooperation on the vaccine front. Indian Prime Minister Narendra Modi said that India’s vaccine production capacities will be important “for the interests of humanity,” and Chinese President Xi Jinping said Beijing “will actively consider” providing its vaccine to BRICS countries “if there is need.”
In a declaration issued at the summit, the BRICS nations said they recognized “the role of extensive immunization against COVID-19 in preventing, containing and stopping transmission in order to bring the pandemic to an end” and vowed they would “work to ensure” that when a vaccine becomes available, “it is disseminated in a fair, equitable and affordable basis.” DARIA LITVINOVA, MOSCOW, AP