Q&A | Victoria Willing – Artist and writer: ‘Men are still in power; all we need is more balance’ 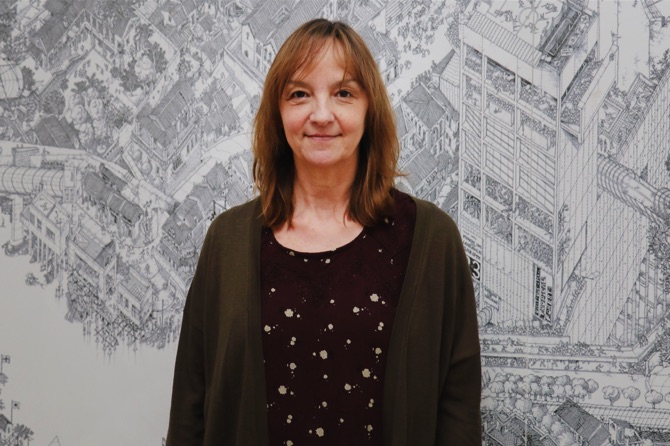 Victoria Willing is a well-known London-based actress, voice artist and writer, known for her work in several movies and TV series productions, such as “The Inbetweeners (2011)” and various Jim Henson Company productions. She is also the daughter of perhaps the most famous Portuguese painter, Paula Rego.

Willing is in Macau to represent her mother at the inauguration of “ARTFEM Women Artists – 1st International Biennial of Macao,” an event jointly organized by the Macao Museum of Art (MAM) and the Albergue SCM. She spoke to the Times in an interview ahead of the exhibition about her mother’s work and what it means to be a female artist.

The Biennial will be running until May 13 at the MAM and features a 2011 painting by Paula Rego titled “Our Lady of Sorrows”.

Macau Daily Times (MDT) – You are here to represent your mother in the opening, the first ever Women Artists Biennial in Macau. Is representing your mother something you do often?

Victoria Willing (VW) – Well, I’ve never done this before. I’ve never represented her [Paula Rego] although I’ve accompanied her [on] several occasions. It’s a responsibility because I don’t know everything about her mind and I don’t know all about what her opinions are so I can only give what I think it is that mom thinks.

But it’s really exciting and a real honor and I’m really excited because I [have] never been in anywhere like this in my life.

MDT – Your mother is known for having strong opinions and feelings about many topics, which she addressed many times in her works. How does she paint the female condition?

VW – Oh yes, women don’t have to do pretty things. There is a kind of understanding with the man artists that they are not going to do “pretty things,” whereas a woman artist is supposed to do pretty things. Being a woman isn’t pretty… It’s very ugly; there is a lot of ugly stuff and she [my mother] is very good putting that part across. It’s mostly about things that most women go through, the heartbreak, the disappointment, the violence, the medical difficulties, all those things, they are all stuff that happens to women and she [my mother] is a woman. She has passed that message through and there have been very overt political moments, created to make a political point. One of them was in the abortion pictures when abortion was not legalized even though there was a referendum and she was very upset that people wouldn’t vote, she very much made a point about that. There have been other issues [such as] “honor killings” and FGM [Female Genital Mutilation] that she also illustrated and that were overtly political points.

I remember that when she was young she did a painting that was called something like “Today we had a lovely lunch and then we went out and killed black people” that was about the war in Angola. So, she had done [some] very obviously political things, which are very powerful I think.

MDT – What do you expect from an event like this Biennial of Women Artists? Is it a way of showing something that always been there just people have not noticed it enough?

VW – Yes, exactly, I think that’s exactly what it is. It’s a way of proving that women artists are artists who are women, not just some women painting some pretty things and then going away again. They are here to stay and they have always been there painting quietly but men are worth more, men are more important, men are more interesting… well now they are proving that is not the case but traditionally it’s a man’s world and only a few women were allowed. In this exhibition we have the professional achievement of 130 women so it’s an example for all women and I do think that unless you have positive discrimination sometimes you don’t get further in equality. It’s still not equal.

MDT – How do you perceive the recent acknowledgement of a high number of harassment cases against women in your industry? How was it possible to hide that for so long?
VW – I think [it] is a cultural thing and I hope that fortunately a younger generation is realizing that [this behavior] is not normal. There are certain things that my generation of women, growing up the 1970s, 1980s, and 1990s, just thought you had to put up with. If you complained you were being silly, you would be “asking for it” and you would be asked if “you were encouraging him,” all those things.

That is changing now but the reason it stayed quiet for so long is because it was normal. It was perceived that as a woman it was your responsibility [to] make sure sexual harassment didn’t happen and it was never the man’s fault. Instead, it was women’s responsibility to stop it from happening.

I think things have changed now and I hope they have changed enough so they won’t ever go back. People were fearful of their jobs. In Hollywood, young women are desperate to get work and you have a great big powerful man… because it’s all about power in fact… women think they must not say anything or make any fuss about it or I’ll never work again, and it is hard enough to get work as it is now. But I do think we are at the beginning of a different era and that’s why I think this exhibition is very timely and coming alongside these changes and changes of attitudes towards women, which were supposed to have [should’ve] changed [a] long time ago. They have [changed] legally but not culturally. It does take a long way from the legal changes until it actually happens in practice. Men are still in power; all we need is more balance.