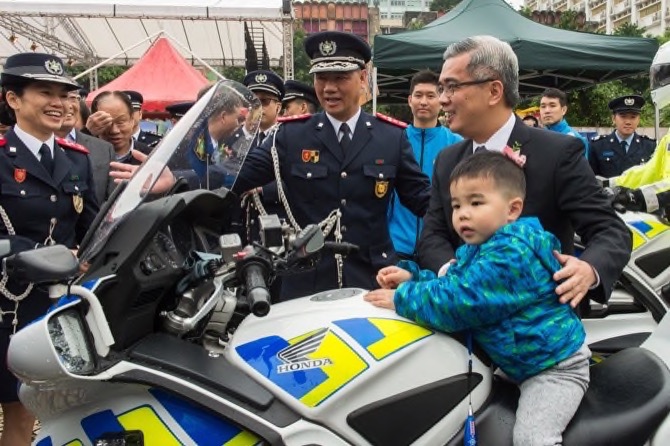 Minor crime is declining in Macau while violent crime is on the rise. This is the conclusion reached from the most recent report on criminality in the region during the first quarter of 2019 (Q1), which was presented yesterday morning by the Secretary for Security, Wong Sio Chak.

According to the figures presented, violent crimes have increased by 8.3% in Q1, when compared year-on-year with the same period of 2018. The first quarter of this year saw a significant rise in the crime of rape, which increased by four cases to total 10 in the first three months of this year. Besides rape, kidnapping also registered significant growth by 34% year-on- year.

In the meantime, crimes such as theft, drug consumption, trafficking, and arson have fallen by between 17% and 20% in the same period.

Concerning crimes against property, the greatest increase seen was in scam cases which, as the Times has reported, have risen by 23% in the first three months of the year. Extortion also represents a significant increase, registering growth of 25%, a little higher that usury which ranked third with about 20% growth.

On the decline were the crimes of motorcycle thefts (down 46%) and thefts in homes resorting to breaking and entering which fell by 25%.

Among crimes, classified by the authorities as uncategorized, the major change was in information technology and computer-related crimes which rose year-on-year by a whopping 110%.

Questioned on the topic, the Secretary then explained that “the crimes under this category are of great variety [with it] not being possible to explain in much detail exactly which ones [changed].”

“The crime related with [unlawful use] of credit cards is the most relevant one,” he added.

Wong also noted that the government is continuously working to combat the so-called “spam messaging broadcasting stations,” although, so far, the outcome seems not to be effective. According to the official, there is a new system being implemented in which the officers will make use of the internet to tackle such broadcasting stations “remotely,” without the need to search for the physical locations from which the broadcasts originate, as it has been done until now.

Other topics that Wong said were “concerning” for the authorities include currency exchange – a crime that led the police to open 770 operations in the first three months of the year and which resulted in the interception of a total of 1,820 people who “were all repatriated.” Wong further noted that from the 1,820 people, some 1,363 people were also punished with a penalty of interdiction from reentering Macau for the period of one to three years.

Meanwhile, crimes classified as being related to gambling activities rose by one-third in the first quarter, according to the statistics presented yesterday, with the crime of usury rising by 37.3% in the first three months of this year, when compared with the same period of 2018.

Although the crimes related to the gaming industry have been increasing and some of them have involved serious consequences – namely homicides as well as kidnappings resulting from gambling debts – the Secretary continued to state that “in the majority of cases, the crimes took place inside the casinos. [There are] no existing signs that such criminal activity has been going beyond the boundaries of such venues, nor constituting a threat to the safety of Macau society,” he said.

Wong added that the majority of crimes (over 93%) involved non-residents.

In his conclusions, Wong said that the police “have not received any information regarding an abnormal development of secret societies brought due to the adjustment of the gaming sector.”

Wong also left the warning that since “this is a special year with a lot of important events” – among them being the 70th Anniversary of the People’s Republic of China, the 20th Anniversary of the Macau handover and the Chief Executive elections – “it is very important to effectively repress crime and reinforce the works on the execution of the law,” he said, reaffirming that authorities would execute their role with severity according to the government’s policy for this year.

Secretary for Security Wong Sio Chak yesterday played down the change in the Civil Protection bill that was recently presented by the Executive Council and sent to the Legislative Assembly (AL) for discussion and approval.

“Before it was named as the crime of social alarm but now it is called crime against safety, order and public peace during sudden incidents of public nature,” he said noting that in fact not much has changed in terms of the definition of the crime.

Wong had been questioned by the media regarding the inclusion in the text of the bill (in the Portuguese version) of the terms “false or tendentious news or rumors,” instead of the original writing that stated “false rumors.”

Without addressing the topic in detail, the Secretary disregarded the terminology saying, “in our perspective, when the suspect has doubts if the news is fake or not we are not going to aggravate such behavior as intentional and as willful misconduct.”

“It needs to be intentional and not by negligence. We are not going to arrest someone just because he disclosed some news.”

The Secretary said that the bill will now enter its discussion at the AL and that the legislative body would perform changes if needed. “We still have time to improve it, although we would like to see it enter into force before the typhoon season this year as this is a very urgent matter.”

Officially Macau has already entered the typhoon season, according to the information of the Weather Bureau, which places the season between May and November each year.