Q&A | João Saldanha, Creator of Macau GP Legends Collection: ‘To exhibit at the new GP Museum would be a lifetime-achievement’ 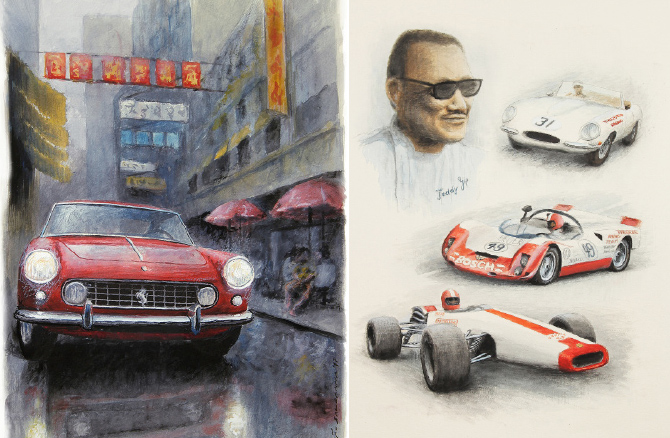 Graduating from both product and graphic design, João Saldanha has started working for several companies in Portugal in the fields of product design, graphic design, illustration, and painting, as well as working as a freelancer.

Drawing and photography had been always present and followed alongside his career as passions and as his favorite means of expression, with acting as tools to aid his professional career.

Since 2013, Saldanha has embraced the illustration and painting of classic cars for Portuguese and international private collectors as full-time work. Saldanha was influenced by his early teenage years, when he used to draw the classic models of Ferrari as a hobby.

You can find Saldanha’s works in many publications, from Portugal to several other countries and regions, as well as on specialty websites and online stores.

As both work purposes and inspiration, Saldanha often attends international classic car events such as “Retromobile” in Paris and “Spa Classic” in Belgium.

Back in November 2016, he presented in Macau his first solo international exhibition titled “Macau GP Legends – Motorsport Art by João Saldanha” at the Rui Cunha Foundation, in an event that took place during the Macau Grand Prix weekend.

To learn more about Saldanha and his works, namely the ones related to Macau, the Times spoke to the artist in an exclusive interview.

Macau Daily Times (MDT) – Most of your subjects are linked to the automotive world and racing. When did this interest start?

João Saldanha (JS) – In my family, the interest in cars [goes back a very long way]. As I grew up in Cascais, just a few kilometers away from the Estoril Circuit, the noise of racecars was a usual thing in my life from an early age. 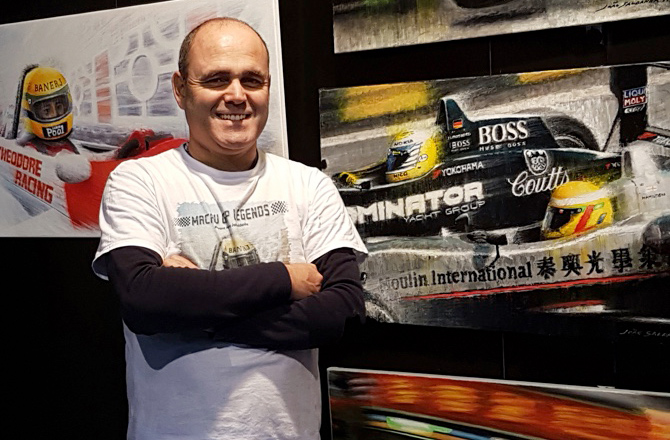 From there, I started to watch all the Formula 1 Grand Prix, but also countless test sessions. During these occasions, I tried to get closer to those powerful and beautiful machines every time.

At the same time, I started to cultivate a taste for design and cars immediately become my favorite topic.

MDT – In 2016, you presented the Macau GP Legends Exhibition in Macau. How did this opportunity come about?

JS – Even before traveling to Macau for the first time in October 2015 by invitation of some family members, I had already started the Macau GP Legends project, with paintings of Eduardo de Carvalho (the first GP winner), Michael Schumacher and Hans Stuck (the 1983 Guia Race winner), with others being studied for future paintings.

It was with these first paintings that I tried to capture the interest of some Macau institutions to have a future exhibition, especially the Grand Prix Museum, but [I was] without success.

In April 2016, when I returned to Macau, I decided to contact the Rui Cunha Foundation, which offered me an exhibition during the Grand Prix week in November that year. From that moment until the exhibition, I finished eight other works that joined the first three in the exhibition.

MDT – Why use Macau as background for your works?

JS – As a motorsport fan, I knew the famous Guia Circuit for many years, as most of the big names have raced there over the years.

My idea was always to produce a series of paintings showing some of the most relevant moments (and personalities) in the history of the Macau GP that could be shown to the public, preferably during the event.

The GP weekends always attract many fans from all over the world to the races and [I realized] that could also be an opportunity for me.

Additionally, I had not given up aiming to attract the Grand Prix Museum as one of the potential parties interested in acquiring some of these works.

MDT – Which technique gives you the most pleasure to use?

JS – Although almost all of the works in the Macau GP Legends series were made in acrylic paint over canvas, the technique I feel most comfortable with is watercolor on paper. It was with this technique that I started doing illustrations in my youth and I was able to perfect it when, some years ago, I decided to become professional.

The technique of acrylic paint over canvas came naturally with time, but in the case of the Macau paintings, the choice for this technique had essentially to do with the transportation of the works, which in the case of watercolor requires extreme care due to the fragility of the material.

MDT – How long does it take to create one of these works?

JS – Time may vary depending on the complexity of the theme, the size of the work or the technique used. In the case of the GP paintings, my goal was to portray the moments as accurately as possible, so there was some extra time involved in the fine detailing.

As an example, for the painting on display currently in Macau at the Macau Guia Circuit Promotion and Development Association (APDCGM) third-anniversary exhibition, my starting point was a photograph I took of Michael Schumacher’s car, which was on display at the GP Museum. The remainder of the work was a composition that I imagined and drew, inspired by several images of the event. From the initial idea to the final painting, it can take from one to two weeks but for most illustrations, using paper support and watercolors, it usually takes from three to five days.

MDT – Who are your clients? How can someone purchase one of your works?

JS – My work is structured into two main areas: the author’s works, and the orders. In the first case, the projects come from my personal taste in car design and motorsport motifs, especially Formula 1 and Ferrari.

In the second case, the theme of the illustration is almost always a classic collection car and it is the customer who chooses how he prefers his car to be represented.

I also participate regularly in classic car events, especially in Portugal, where I exhibit and sell directly to the public the latest works and also receive orders from customers in a direct manner.

MDT – As you mentioned earlier, at the moment there is one of your works on display in Macau in a collective exhibition. Do you aim to exhibit again on your own?

JS – The Macau GP Legends series is now composed of a total of 15 paintings and at this moment I cannot say whether there will be new works joining those in the series. The fact is that the Macau Grand Prix Museum is still closed for renovations and for such a long time created a long “stand-by time” concerning the fate of these paintings.

I still want to propose to the new Grand Prix Museum an exhibition of this series and may be some of them can become part of the permanent collection of the museum.

Besides my solo exhibitions, I have been keeping a continuous presence in Macau through the collaboration with APDCGM since 2017, organizing collective exhibitions.