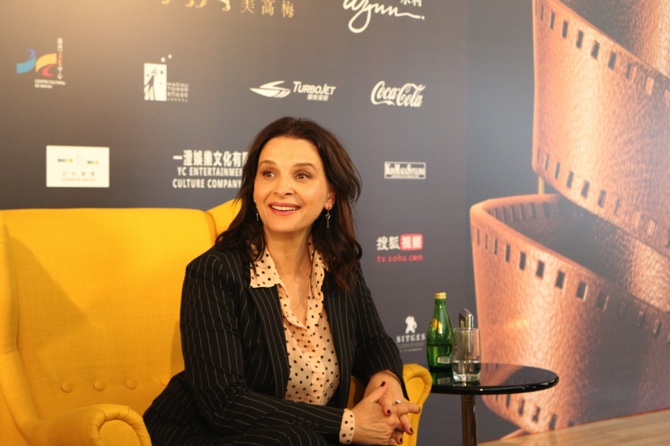 Talent ambassador of the 2019 International Film Festival & Awards Macao (IFFAM) Juliette Binoche has told the press to “move on” regarding the public censure of Harvey Weinstein.

Just last week, the producer – charged with two counts of predatory sexual assault – was accused of having violated the conditions of his release, as his whereabouts were unknown on at least 56 separate occasions. The accusation was made by prosecutors who, highlighting Weinstein’s serious flight risk, asked a judge to increase the disgraced producer’s bond from $1 million to $5 million.

Speaking to the international press yesterday, the Oscar-winning actress was not impressed with a question raised regarding the Weinstein allegations.

“It’s been on and on,” she told the press. “I think he knows it was bad what he did, and he knows that he was judged […] it’s not my story, it’s his story and everything has been going through a process.”

“You know what? I’ve expressed myself several times about it and it seems that it’s going on and on and it’s repeating itself. What I want to say right now is ‘move on,’” said Binoche.

According to the French actress, justice has run its course, formerly noting that she had no problems working with the producer on Chocolat and The English Patient.

Meanwhile, Binoche said she was keen for the invitation to star in a film by award-winning Chinese director Diao Yinan, as she expressed on Monday during a public conversation hosted at the IFFAM. Despite the possibility of censorship, the actress signaled that she is ready to embrace the possibility of working with Diao.

Yesterday, you seemed to accept the invitation from Diao Yinan. If that project goes ahead, are you ready to have your work scrutinized by Chinese censorship?

Juliette Binoche – No, I want to be free, and I will be free. There are many ways to be free. As actors, you have boundaries, definitely. […] But inside, you’ve got to find your way. Freedom, truth and love are wonderful inner and hidden ways to free yourself. There are always ways to express yourself, even though it’s hard. I always have compassion for the audience who cannot really express themselves here. […] I think you still have to continue your art as much as you can.

Working through spectrum of films and directors who took you to other areas and countries, are there still names on the wishlist of people you want to work with?

Juliette Binoche – I try not to think too much because maybe I don’t have the time. When I met with three very interesting Chinese directors here that I didn’t know before, I was very excited with the idea of having a common film together. It may happen. I don’t see it in advance because I don’t have too much time, but life does it for you as well. But you’ve got to really connect with your inner self. That’s the key. If you’re really in touch and letting yourself be, then things happen – whether you want it or not. That’s really what I experience. I hope those projects will happen, you just have to send the right thoughts and feelings about it.

We live in a very fast-changing media landscape, do you feel that cinema can still change lives as it used to in the last couple of decades?

What are the inspirations and working methods for you as an actress?

Juliette Binoche – As an actress, I want to go through a journey I don’t know yet. You have to express one’s truth and confront yourself with a script, with your way of working. It’s just meeting another artist […] there is a certain rhythm. For me when I start to work, I always start with silence because silence allows everything. You’re working with a soul so you’re discovering that person while you’re going through it. With Naomi Kawase, I knew that nature was very important. So the need of making the film [required] being in touch with nature.

Having worked with foreign directors and in foreign countries, do you still retain that “French” spirit?

Juliette Binoche – What is French? Tell me. […] Maybe the need to be independent? What could it be? I’m not really sure. Rebellious in a way; provoking because you want truth of your own feelings; and not fitting into the stereotype – that, definitely. You have to feel your own truth – coming from your experiences, what you know about life. After that, I don’t know what it means, because I feel very close to people that have come from a different world.