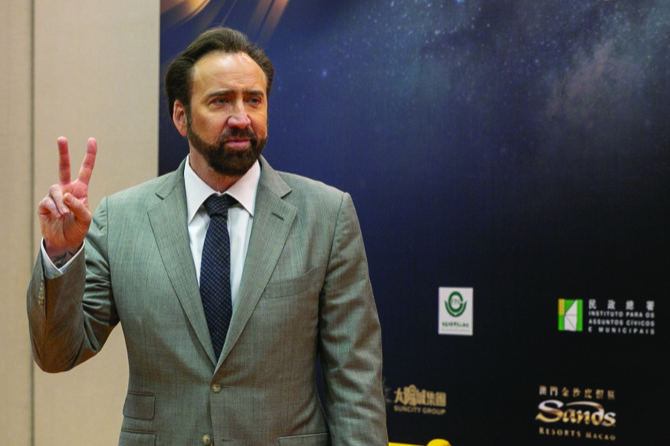 Prolific actor, director and producer Nicolas Cage was asked this year to become a talent ambassador for the International Film Festival and Awards – Macau and he graciously accepted.

It’s not the first time in Macau for the Hollywood star who won over the hearts of Chinese audiences long before his compatriots were set on cracking the lucrative market. Five years ago Cage was bestowed with the Best Global Actor in Motion Pictures award at China’s Huading Awards ceremony hosted in Macau.

Speaking at a press conference over the weekend, Cage said he is grateful for the reception he’s had in China and says he holds the country, its cinema and its people with the highest of regards.

So much of Hollywood is itching for acceptance in China. But you’ve already made it. What do you think of your success here?

Nicolas Cage – There is a reason why I keep coming back to this part of the world. I am here to say thank you. I know that the reason I am still blessed in Asian movies is largely because of China and Chinese cinema and investors, [who] have thankfully enjoyed my presentation in different films. It’s because of the film industry here that I think I’m blessed to continue working.

What are your thoughts on the development of Asian cinema, particularly in China?

NC – I think that Asian cinema is really one of the great presentations of cinema in the history [of this industry]. The amount of style and talent that goes into Chinese movies, Japanese movies, Korean movies is quite remarkable. I have been blessed to work in several Asian productions.

Do you sense a style inherent to Chinese cinema?

NC – There is a style to it and a charisma and energy that borders on musical, operatic, dance and ballet… and violence. I find it very powerful and very exciting. I can’t say that all Chinese film embraces that style, but I can say that my first-hand experience with Chinese filmmaking has that sense of rhythm. When I did Bangkok Dangerous, I remember [co-director] Danny Pang saying to me: ‘When you fire the gun, I want it to be bam-bam, bam’ – one-two, three – down to that level of detail! Almost like the gunfire itself was percussion or music. It was that precise that it was almost like dance.

You live in Las Vegas and have made many films there. Do you see Macau as a sister city?

NC – I don’t really think that. I think that they are two entirely different cities, with the exception that some of the hotels are similar. With the Portuguese influence and the Chinese cuisine and style, I think Macau stands in its own right as a unique experience.

Then how do you see Macau?

NC – I think this is a place that has a wonderful history. Macau is fascinating to me because of the harmonious cultural interactions between Chinese and Portuguese. When I walk and look around Macau, I enjoy looking at the architecture and seeing the influences. I took a tour once, about two years ago, and the tour guide said something so touching to me. He said that the children, when they go to school, they walk together […] and they’re completely safe. It [Macau] always seemed like a nice place to retire one day.

Any advice for aspiring actors and filmmakers?

NC – My advice is very simple. Do not let others impinge or attack your dreams or your belief in your own abilities. I almost didn’t make it as a film actor. I was told I couldn’t do it by people very close to me. I was rejected, rejected, rejected: nobody wanted to make a movie with me. [Aspiring filmmakers] need to remember that there will be those who want to kick you off the path and you just have to not give up. DB