Q&A | Wilfred Wong – President and COO, Sands China: ‘In The Parisian we try to cater for the middle class, the MICE people’ 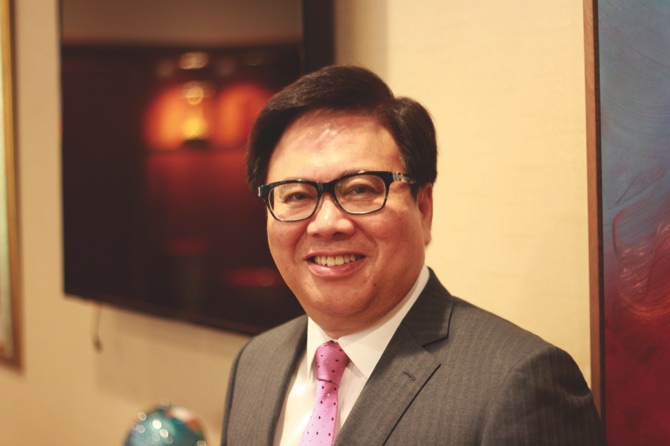 Wilfred Wong assumed the role of president and chief operating officer (COO) of Sands China at the end of 2015. A week ahead of the opening of the fifth Sands China property in Macau, Mr Wong talks about the new elements that the Parisian will bring to Macau.

Macau Daily Times – The Parisian is about to open. What is your feeling about the new property?
Wilfred Wong (WW) – I think this is a really good addition to the ‘family.’ We aim to create an integrated resort that would cater to different sectors of the market and create a theme that would attract more tourists to Macau. It is not about just one aspect of our development, it is about the total picture that we have in mind. How do you attract more visitors to Macau? That is why The Parisian is a themed development and we are attentive to the detail in everything we do.
First of all, we have the replica of the Eiffel Tower. That is an attraction in itself and we have got a lot of attention from social media. There are hundreds of million hits for the Eiffel Tower. Inside the building, in all the public places, we copy famous tourist attractions in Paris. Basically, we are capturing Paris and the good thing is that we have all the shopping streets covered. You know, you are not subject to the rain, the sun and the weather; you are very confortable but you have the feeling [of being in Paris]. We have all kinds of facilities that would justify the size of the 3,000-room hotel. Why do we need such a big hotel? We have MICE facilities, we are adding 56,000 square feet of ballroom, function rooms, meeting rooms to the space. And the space is linked by a footbridge to the Venetian Convention Center. In addition we have 1.6 or 1.7 million square feet of convention space.
MDT – So MICE will be one of the segments to watch?
WW – Yes, we feel this is an important segment. The second segment would be the families, the middle class – an affordable, luxury type of tourism – so we have kids’ facilities (a kids’ club that is sized at 20,000 square feet) linked to an “Aquaworld” and for the parents, you have 170 retail shops. These are mid-priced, very good products, with some names that you recognize and others you don’t recognize, because they are new in Macau. It is a very good mix, but we don’t sell Hermès, we don’t sell LV, because that is the Four Seasons shops. So we have a segmentation of our customers and that in itself is an attraction. Then we have a theater that can seat 1,200 [people]. That is a good size, musical, cabaret type of theater.
MDT – The debut show will be “Thriller Live,” scheduled to run from September 30 to November 13. Why was a Michael Jackson-inspired show chosen as the first resident show at The Parisian?
WW – We have been thinking what would be a good show to  start off. It must be proven [to have] quality. “Thriller Live” has been eight years at the West End [in London], four million people watched it, and have confirmed that this is a good show. Secondly, the Chinese tourists would have to know him [the show’s theme]. What is that show? It’s Michael Jackson, more than the Beatles, because the younger people probably don’t know enough about the Beatles, not to mention Elvis Presley. We had a choice at the beginning: Michael Jackson, Beatles, Carole King, all these names. But the one people said immediately ‘I can associate with’ is Michael Jackson. […] We are going to run the show for six weeks. If the response is good, we can prolong it. Otherwise we will move on to another show. The idea is that we will move from one show to another.
MDT – Can you disclose some of those shows?
WW – We are looking at all sorts of possibilities. For example, we are talking about showcasing a cabaret style show, because this is Paris, we are looking at other shows, but you know, I don’t want my competitor to steal the show from me [laughs]. The idea is that right now, Macau lacks resident shows. We do have concerts, we do have one-offs. But there are very few resident shows that hit the market and create awareness among our audience.

MDT – What will differentiate The Parisian from the other Sands China properties?
WW – The Venetian and The Parisian are the two brand names of our company. They are icons – both have 3,000 rooms. But The Venetian’s room size is bigger, as every room is a suite. In The Parisian, we try to cater for the middle class, the MICE people.  So we would want to cover the traveling public and the MICE people at the right price range. […] We are hitting a price point where it is the middle class segment that we want to have. That completes the range of segments that we are looking at in our portfolio, because we have St Regis, Four Seasons and Venetian at the five-star level, then we have the four-stars,  like Conrad and Sheraton.  Then we have the Holiday Inn. Now The Parisian. So basically we are covering the whole spectrum.
MDT – Is The Parisian only targeting tourists?
WW – No. And that is why we are going to offer discounts in many fronts of the property to local Macau people in the first two weeks of our opening. We want the Macau people to own this property, treat this as one of the places they would go over the weekend with their families.
MDT – What are the expectations in terms of visitor numbers to The Parisian?
WW – I would expect it to match The Venetian.
MDT – The resort has been authorized to hold a total of 150 new tables. Of those, only 100 will be available on September 13 opening. Are you satisfied with the table allocation?
WW – I never use the word satisfied. What I always said is that I respect and understand the government’s decision, because they are subject to the three-percent annual cap and therefore there are certain limitations. […] What we are saying is: if in the future there is a chance that the government, together with the central people’s government, decides to uplift that three percent, therefore releasing more quota, we hope that consideration will be given to adjusting our table [allocation], because we only get 150 this time.
MDT – How many tables from other properties will be moved to The Parisian?
WW – We are moving 310 tables from all of our properties. So The Parisian will open with 410 tables, overwhelming majority mass market.
MDT – The Chief Executive (CE) will not attend the opening ceremony, since he will be in Portugal. Who will represent the government?
WW – They normally would send the acting CE. These things happen. When we decided on the date, we did consult the CE office and he said he may not be here. Due to the Mid-Autumn festival immediately after, followed by the October Golden Week, it is better for us to open before those holidays.
MDT – So you are expecting a strong start?
WW – I think so. The booking of the hotels looks very solid.