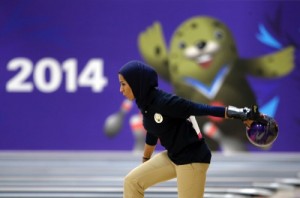 The Qatar women’s basketball team forfeited a match against Mongolia yesterday and is considering withdrawing from the Asian Games competition after players were refused permission to wear a hijab.
Confusion over the implementation of recently relaxed regulations outlined by the sport’s international governing body, aimed at making the game more inclusive, could be the cause of the problem in Incheon.
“The Qatari players refused to take off the hijab,” Asian Games Organizing Committee spokeswoman Anna Jihyun You told The Associated Press. Ten minutes after the scheduled start, “At 4:25 p.m. local time, the match was declared forfeited and awarded to Mongolia.”
You said match officials did not receive any instructions to allow head coverings, and were only following the rules which restrict the use of headgear, hair accessories, and jewelry.
“The organizing committee is not involved in the rules, and the match officials did not have any directions from world body FIBA regarding the same,” You said.
The Qatari contingent was surprised by the decision, with its chef-
de-mission Khalil al-Jabir saying the team “was not likely to play” basketball in these Asian Games if the players are not allowed to wear the hijab.
“We were expecting our players to play with the hijab, that’s why we came here,” he said. “’’Nobody told us that it will not be allowed and we are still waiting for clarifications.”
Meanwhile, competitors have been allowed to wear hijabs in other sports, including badminton, shooting and track and field.
The rules of all sports are governed by their respective international federations, and many allow head coverings for certain athletes during competition.
Regulations about head coverings in basketball came into focus this year when two Sikh players from India were told to remove their turbans during the Asia Cup in July in China.
Earlier this month, FIBA said it was launching a two-year trial phase allowing players to wear head coverings.
However, the Mies, Switzerland-
based organization issued a clarifying statement last week saying: “Please note the Central Board decision allows exceptions to be applied only at the national level and the Asian Games is an international event.”
To get an exemption for domestic tournaments, national federations must petition FIBA to allow players to play with their heads covered, plus submit follow-up reports twice a year.
FIBA’s governing body will evaluate the rule again next year, and determine whether to allow head covers at some level of international competition from next summer.
A full review in 2016 will decide if it will become a permanent rule change after the 2016 Olympics. C.Rajshekhar Rao, Incheon, AP