Quarantine waiver extended across mainland side of Greater Bay Area 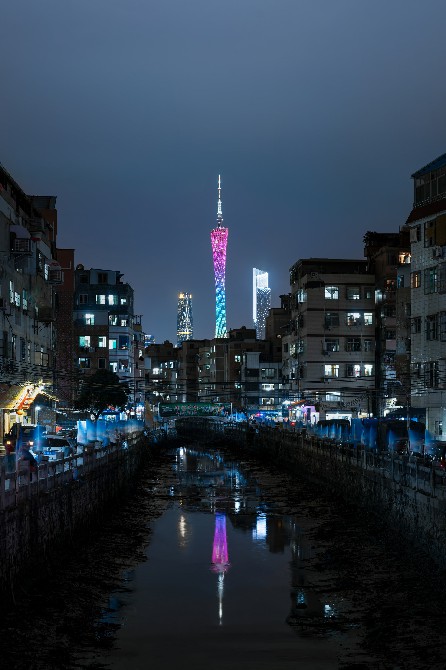 A residential neighborhood in Guangzhou, capital of Guangdong Province, against the city’s iconic Canton Tower.

Selected Macau residents are now able to travel more freely across the Greater Bay Area after a quarantine waiver scheme previously applicable to just Zhuhai was rolled out to cover eight more mainland cities.
From today, Macau residents who do not have a Zhuhai Residence Card can now apply for quarantine-free travel to nine cities in Guangdong Province, the Novel Coronavirus Response and Coordination Center announced yesterday.
Authorities began accepting applications for the quarantine waiver for some Macau residents in mid-June. The scheme began with a quota of 1,000 people per day and has recently been expanded to 3,000.
In the previous phase, approved Macau residents could only remain in either Macau or Zhuhai. This meant that even though they could cross the border, they were only exempt from quarantine in Zhuhai. Once they left Zhuhai, they would be quarantined upon entering other cities in the province.
However, approved Macau residents are now allowed to move between Guangzhou, Shenzhen, Zhuhai, Foshan, Huizhou, Dongguan, Zhongshan, Jiangmen and Zhaoqing from today.
Once approved, they will be able to move between the nine cities and the Macau Special Administrative Region for the seven days following the date of the approval.
Only essential travel, namely for the purposes of public service, business or other special reasons, is permitted and this will be strictly monitored, according to the government.
Macau residents seeking quarantine waivers need to meet several other conditions.
Firstly, they should not have travelled to any other places besides the mainland and the Macau SAR in the preceding two weeks.
Second, they should not have any respiratory symptoms, such as cough, shortness of breath or fever.
Third, they need to hold a Green Macau Health Code.
Finally, they should have a negative Covid-19 nucleic acid test result. The requirement for a nucleic acid test is to check if the individual is infected and the virus has been replicating at a detectable level.
These four rules are in place to lower the possibility of these residents having coronavirus and transmitting the virus in the community.
Other special arrangements are also in place to decrease the chances of an outbreak. For example, Macau residents with approval must enter Zhuhai through either the Hong Kong- Zhuhai-Macau Bridge or the Lotus Bridge, which connects Cotai to Hengqin.
The authorities said that entering through other border checkpoints will result in residents having their waivers cancelled.
Twenty-four hours prior to crossing the border, approved Macau residents will also be required to fill out a mainland health declaration on WeChat.
At the border, approved Macau residents must present their mainland-entering card, more commonly known as “the home-going card,” their Macau ID card, their Macau and Zhuhai Health Code and their negative Covid-19 test result.
Although the quarantine waiver approval is valid for seven days, approved Macau residents are allowed to remain in the city for longer. For the first two weeks, they must remain in the nine shortlisted cities. After, they will be allowed to move around the province.