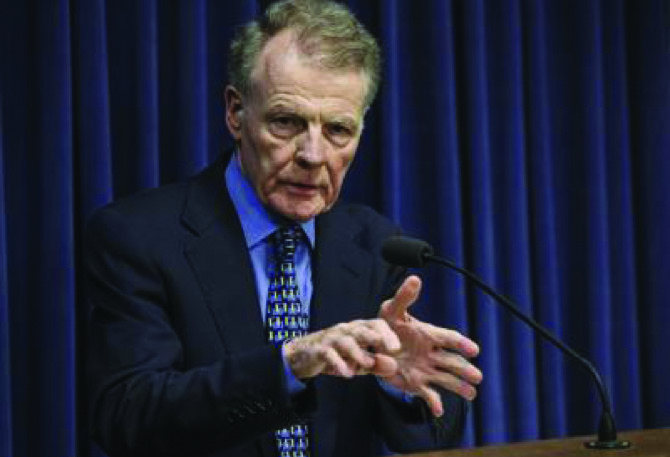 The 120-page court affidavit says an associate of the Chinese developer recorded Madigan (pictured) during an Aug. 18, 2014, meeting at Madigan’s law office

A Chicago newspaper reported that a lengthy federal court affidavit says the FBI secretly recorded Illinois’ powerful House speaker in 2014 discussing a hotel development project and the possibility of its Chinese developer becoming a client of the speaker’s private law firm.

The Chicago Sun-Times report on Michael Madigan, a formidable powerbroker in Illinois for decades, suggests a federal investigation may cast a much wider net than first thought after it led to an attempted extortion charge earlier this month against an influential Chicago alderman, Ed Burke.

Madigan, a 76-year-old Chicago Democrat, is the longest-serving current speaker of a Statehouse in the U.S. He has held the post almost continuously since 1983. The recent swearing in of Democratic Gov. J.B. Pritzker only boosted Madigan’s influence by ending four years of divided government with Republican Bruce Rauner at the helm of state.

In a statement to the Sun-Times, a Madigan attorney, Heather Wier Vaught, denied any wrongdoing by the speaker, adding neither he nor his law firm is under investigation to their knowledge. In none of the alleged Madigan comments cited by the Sun-Times does the speaker say he’d exchange official action for new legal business. The newspaper doesn’t cite the affidavit as saying Madigan was ever an investigative target or faced any prospect of being charged.

The 120-page court affidavit obtained by the Sun-Times says an associate of the Chinese developer recorded Madigan during an Aug. 18, 2014, meeting at Madigan’s downtown Chicago law office about the proposed hotel in the city’s Chinatown neighborhood. It was never built, though developers did secure requisite zoning approval from the City Council.

The newspaper does not provide details about how it obtained the affidavit.

During the meeting, Madigan allegedly said to the developer about his Madigan & Getzendanner law firm that “our interest would be that we represent buildings like that on the real estate taxes.” A Madigan’s law partner also explained, through the associate, who translated for the developer, that its fee would be 12.5 percent of any tax savings or a fixed annual fee of between USD3,000 to $3,500, the newspaper reported.

The Sun-Times report says the 2014 meeting was arranged by Alderman Danny Solis, whose ward included the would-be hotel’s location. The newspaper has previously reported Solis, a chairman of the City Council’s zoning committee, was cooperating with a federal corruption investigation, including by secretly recording Burke. Yesterday [Macau time], Mayor Rahm Emanuel’s office announced Solis has resigned as the head of the zoning committee. It offered no detailed explanation, but did include a brief statement from Emanuel saying Solis “recognized that he cannot effectively preside over the matters before” the committee.

Charging documents in Burke’s case focus on his private law firm and accusations he tried to squeeze the owner of a Burger King franchise for legal business in exchange for city construction permits. Burke, who has personified Chicago machine politics for decades, is charged with one count of attempted extortion and has denied any wrongdoing.

The Sun-Times says the developer’s associate telephoned Alderman Solis three days after the sit-down meeting with Madigan to tell the alderman the developer had agreed to hire Madigan’s law firm. But neither the associate nor the developer signed a retention deal with the law firm by the time the 2016 affidavit was composed, the Sun-Times reports.

The Madigan attorney added that, if it was true that some of the speaker’s conversations were recorded, Madigan was unaware of it and “has no concern if they were.” She added Madigan “has no recollection of ever suggesting that he would take official action for a private law firm client or potential client.”

Solis has not been charged. And he has previously denied cooperating with federal investigators or secretly recording others on their behalf.

Burke has also denied any wrongdoing in his criminal case.

A spokesman for the U.S. attorney’s office in Chicago, Joseph Fitzpatrick, declined any comment.  AP