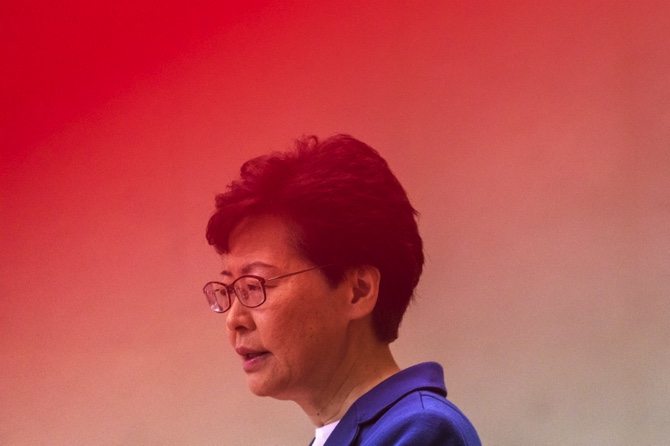 Tien said he has information from Beijing that the government was considering candidates to fill Hong Kong’s top job next year. His comments came after the Financial Times reported, citing unidentified people briefed on the deliberations, that an “interim” chief executive would be installed by March if President Xi Jinping decides to carry out the plan.

“They recently assessed that this could go on for a while,” Tien said in an interview on yesterday. “Dragging this thing out is actually bad for everyone, for Hong Kong, the police. So now they need to sort of take action. And I have heard it’s going to be next year, probably February or March.”

Lam’s replacement wouldn’t necessarily stay on for a full five-year term. Tien said Beijing was weighing two different scenarios: Either appointing a “caretaker” who would serve the remainder of Lam’s term, or try out someone who could conceivably stay on after the next election for chief executive in 2022. Tien said a replacement would need to be elected by the 1,200-member election committee.

A spokesman for Lam’s office declined to comment on the speculation over her position.

The Financial Times said Norman Chan, former head of the Hong Kong Monetary Authority, and Henry Tang, who previously served city’s No. 2 official, were leading candidates to succeed Lam. Both Tang and Chan declined to comment on the FT report Wednesday.

“This is a political rumor with ulterior motives,” spokeswoman Hua Chunying told reporters at a regular briefing.

Replacing Lam would represent a delicate reversal for Xi’s Communist Party, which doesn’t want to give a victory to protesters demanding direct elections. Still, Beijing is under pressure to ease months of unrest, which has helped push the city toward recession and provided ammunition to the party’s critics from Taipei to Washington.

Lam’s introduction of legislation allowing extraditions to China sparked months of increasingly violent protests against Beijing’s tightening grip over the city. Her moves to withdraw the bill – which formally took place yesterday – and invoke a colonial-era emergency law to ban face masks have done little to stem the chaos.

“Business should not expect that the removal of Lam will end the civil unrest,” Verisk Maplecroft, a consultancy that advises businesses on political risk, said in a note on yesterday. “No matter who the next chief executive is, the protesters will continue to demand an independent investigation into police conduct amid widespread dissatisfaction with how the authorities are managing the demonstrations.”

Lam told a gathering of business people that she had caused “huge havoc” and would quit “if I had a choice,” according to audio excerpts released by Reuters last month. She subsequently told reporters that she never asked China for permission to resign over the historic unrest rocking the city.

If Lam resigns, responsibility for leading the city of 7.5 million would fall immediately to Chief Secretary Matthew Cheung, who can act as chief executive for as long as six months. Before that interim period ends, the city’s 1,200-member Election Committee comprised overwhelmingly of Beijing loyalists must meet to select a new leader.

In 2005, Hong Kong’s first post-colonial leader, Tung Chee-hwa, resigned after mass protests forced him to withdraw China-backed national security legislation. Tung, a shipping magnate, held onto the job for more than a year after the demonstrations peaked as the party settled on a succession plan.

“She can go, if she wants to,” Mo told Bloomberg Television. “You might say, ‘What’s the point of having Carrie Lam gone? There would just be another puppet in place.’ But at least we can have a new face, and let’s have a restart, if possible, between the government and the people.”

In her annual policy address last week, Lam tried to appease the economic concerns of poorer Hong Kong citizens with incentives for first-time home buyers and annual grants for students. Still, she didn’t make any new proposals and repeated her opposition to the protesters’ demands, including granting amnesty, an independent police inquiry and the ability to nominate and elect their own leaders.

“Heads need to roll” in order to show the administration is accountable but Lam’s removal would also carry risks for the Communist Party in Beijng, said David Zweig, an emeritus professor at the Hong Kong University of Science and Technology and director of Transnational China Consulting Ltd.