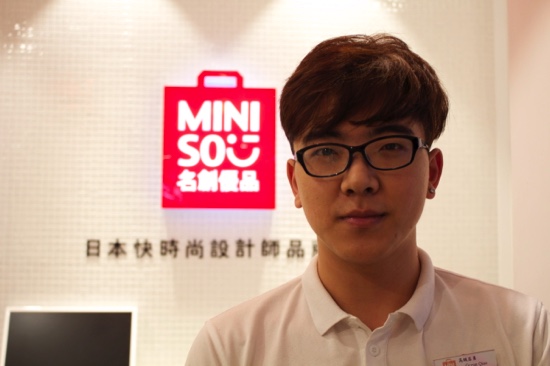 Chinese-Japanese brand Miniso has come under fire over recent weeks after Internet users widely questioned the brand’s origins. Although the company’s design philosophy is attributed to Japanese designer, Miyake Junya, its business head is 38-year-old Ye Guo Fu from China.
Rumors have been fueled by the brand’s lack of popularity in Japan. According to the Straits Times, Miniso has just four stores in Japan, while it has more than 1,100 in China.  Many of these stores are located in Guangdong – where the company’s Chinese headquarters are based – and also in Macau and Hong Kong.
The contention led some to claim that the products are better described as “made in China to look Japanese.”
And the brand’s logo closely resembles some of its competitors in Japan, evoking other Chinese copy-cat brands on the mainland, where copyright legislation is negligible. Critics have drawn comparisons with other Japanese high-end dollar stores, Muji and Uniqlo, both of which share similarities in design with Miniso.
The Times interviewed 24-year-old Ocean Qiao, the general manager of the Miniso store on Avenida da Praia Grande, who explained that the brand’s lack of popularity in Japan was not the result of inauthenticity, but a result of the reputation of better-established competitors, like the 100-yen store Daiso.
“People in Japan prefer to go to Daiso. It’s the same with MacDonald’s and KFC in the U.S. People just prefer one over the other,” said Qiao, before adding, “Minoso is the KFC [in the analogy].”
However despite the manager alluding to the fact that Miniso might be regarded as a second-
rate alternative, his comments did not account for all of the concerns relating to lack of authenticity.
Reports from Internet users suggest that the packaging used for the products contains an odd mix of characters from the various Japanese writing systems leading media website, The Beijinger, to claim that it makes for “an interesting but incoherent bastardization of the Japanese language.”
Upon being asked why Miniso seems to have surged in popularity in China, Qiao – who is Chinese himself – says “people here like Japanese products because they regard them as being of a high quality.”
Meanwhile, chief designer, Miyake Junya, told The Straits Times that it was “funny” that “the high performance of Miniso in China has overshadowed the business in Japan.”
“I do wish to see Miniso become more successful in Japan, but I find it even more exciting to share the Japanese design philosophy with people around the world,” he added.
The store on Avenida da Praia Grande, is the second largest of the four stores operating in Macau, yet according to Qiao, it is the busiest. The largest store is located near the border gate in the northern district.
“70 percent of the store’s customers are Macanese residents, 10 percent are Filipino or Vietnamese living in Macau, and 20 percent are tourists,” the Miniso’s director of marketing said.

Ocean Qiao told the Times that since December, business has been exceptionally busy due to the Christmas and New Year period and in preparation for the Chinese New Year holidays. He speculated that many Filipinos are buying products as gifts to take back to the Philippines.

“The Filipinos love the cars [toys] and the Bluetooth sets.”