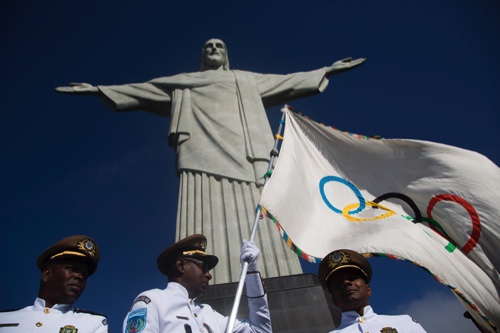 This Aug. 19, 2012, file photo shows the newly arrived Olympic flag in front of the Christ the Redeemer statue in Rio de Janeiro

Organizers of the 2016 Olympics and Paralympics in Rio de Janeiro are struggling to find enough unpaid volunteers and have extended the registration period for another month.
In a country that is divided starkly between rich and poor, many cannot afford to work for free. There is little tradition in Brazil of volunteering or philanthropy.
Organizers said Friday that 170,000 people had registered ahead of an initial Nov. 15 deadline — which has now been extended to Dec. 15. The goal is 300,000 applicants, from which 70,000 will be picked.
Flavia Fontes, who manages the volunteers’ program, said registrations had picked up in the last few weeks.
“It is clear that there are still many interested people who have yet to register, so we have decided to extend the registration,” she said. “This really is the last chance.”
Fontes said there was no problem finding volunteers, and she said the Dec. 15 deadline would not be extended. “We just don’t want people to miss out.”
Volunteers perform a range of jobs like greeting fans and escorting athletes. They must pay their own lodging and transportation to the host city. They get transportation to venues and meals on the days they work, some training, uniforms and no pay. Fontes has she expects non-
Brazilians to make up about 5 percent of the final 70,000.
Organizers say candidates have a wide range of experience, ranging from young students to some holding advanced university degrees. Many of the medical staff at the Olympics will be volunteers.
“We are very happy that such a wide range of people have registered for the program,” Fontes said. She said some people have declined to register, fearing too many have already signed up.
Olympic volunteers save their local organizing committees tens of millions of dollars.
The International Olympic Committee conducted a study of the 2000 Olympics and found volunteers were worth about USD60 million. Sydney used only 40,000 volunteers.
The operating budget for the Rio Games is $3 billion, which is the cost of running the games themselves. Overall, Rio is spending about $20 billion —
a mix of public and private money — to build sporting and urban infrastructure to prepare the South American city. 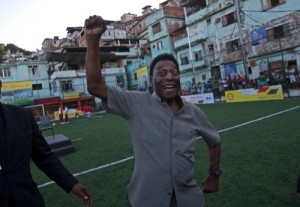 A Brazilian hospital says Pele has been discharged after undergoing surgery to remove kidney stones. A statement from the Albert Einstein hospital said that the retired football player left on Saturday. It offered no other information.
The 74-year-old Pele was hospitalized Wednesday evening after canceling his appearance at an event at the Pele Museum in the coastal city of Santos because of stomach pain. He is widely regarded to be among the greatest football players of all time. Stephen Wade, Rio de Janeiro , AP