Roma moves ahead on ambitious 1.5b euro stadium plan 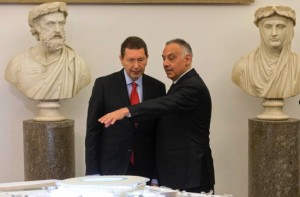 Three-time Serie A champion Roma is moving ahead with an ambitious 1.5 billion euro (USD1.7 billion) plan for a new, privately financed stadium and surrounding business and entertainment center on the city’s outskirts.
Pending government approval, construction will begin by December and last up to two years, the club’s American president James Pallotta announced yesterday as he handed over a detailed dossier on the project to city authorities.
“If we are going to consistently compete as a top club in the world we need a new stadium, a stadium that is privately owned by AS Roma,” Pallotta said, adding that the entire project will amount to “one of the most important projects in Italy in many, many decades.”
With a design inspired by the Colosseum, the stadium will seat 52,500 spectators and be able to expand to 60,000 for major matches.
The site in Tor di Valle is about halfway between downtown and the Leonardo Da Vinci airport. The 125-hectare (300 acre) area will also include a training ground for Roma, three high-rise office towers, plus parks and commercial and entertainment areas.
Costs for the stadium itself are estimated at 300 million euros ($335 million) but the overall price includes surrounding infrastructure and transport.
While some of the financing is expected to come from Roma’s sponsors like Nike, it remains unclear where the other money will come from.
“In terms of who wants to invest, we have a substantial list and I’m positive that they wouldn’t like us to name them today,” Pallotta said. “But we don’t feel like we’re going to have an issue at all with the financing of the stadium.”
Slated to open during the 2017-18 season, the stadium has been a big goal since Roma was purchased by a four-man group of Boston executives, who in 2011 became the first foreign majority owners of a Serie A club.
Pallotta is a minority owner of the Boston Celtics and a hedge-fund manager who runs Raptor Capital Management.
“If you give me approval tomorrow we’ll find the money tomorrow,” Pallotta said. “We know it’s a six-month process.”
For years, Roma has shared the Stadio Olimpico with city rival Lazio but that stadium features a running track and poor sightlines for football. The new stadium will be purpose-built for football.
Roma is also hoping that the new facility can help eliminate problems of fan violence and racism that often tarnish matches at the Olimpico. Pallotta has been waging a verbal battle with the club’s hard-core “ultra” fans this season.
“If there’s one thing that has consistently come back to me on dialogues as I walk the streets of Rome, it’s that many people say to me they haven’t felt comfortable taking their children or coming as a family to the stadium,” Pallotta said. “That’s just completely unacceptable.
“Whether it’s violence, whether it’s racism or any other issues, I just don’t feel like they should be part of the conversation at the stadium as part of our fan base,” Pallotta said.
Roma has finished second in Serie A to Juventus the past two seasons. It last won the league in 2001. Andrew Dampf, Rome, AP