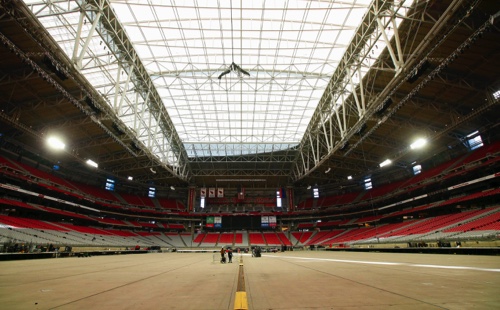 The roof remained closed at University of Phoenix Stadium, where the NFL football’s Super Bowl XLIX will be played, while the grass field remained outside in the sun

The Super Bowl stadium in sunny Arizona will present a dilemma for NFL officials as they grapple with a question that is faced by many pro sports teams in an era of retractable roofs: Whether to play the game with the roof open or closed.
The NFL says it plans to keep the retractable roof open at University of Phoenix Stadium for the Feb. 1 game between the Seattle Seahawks and New England Patriots, but if there is a sign of inclement weather, the roof will be shut.
The fact that the question is even up for debate may seem strange given the location. The game will be played in a place where tens of thousands of visitors flock each winter for the sole purpose of basking in the warm sun.
But the occupants of the stadium and the other three NFL teams with retractable roof stadiums actually play many more games indoors than with the roof open, even as their counterparts in cold-weather cities like Buffalo, Green Bay and Chicago get by in open-air facilities.
The Arizona Cardinals did not play a single game with the roof open this season, despite spectacular weather for some late-season games. The Dallas Cowboys opened the roof of their USD1.3 billion stadium once in the past two NFL seasons. The Indianapolis Colts have played about a third of their games outside since opening their stadium in 2008, while the Houston Texans have opened their roof for about 40 percent of the games dating to their founding in 2002.
Since the Cardinals’ stadium was built in 2006, the team has played 22 games with the roof open and 71 with it closed.
To the Cardinals, another stat is more telling. The team has sold out every game at University of Phoenix Stadium since it opened. In the 18 years it occupied the outdoor Sun Devil Stadium at Arizona State University, it sold out 12 games. The stifling heat and uncomfortable bleacher seating were partly to blame, but the team was also one of the worst in the league during that period.
The need for retractable roofs has played a role in recent public debates over stadium projects, especially those relying on scarce public money. A retractable roof typically adds $25 million to $50 million to a domed stadium project, and it typically costs a few thousand dollars to open and close the structures each time, said Mark Waggoner, a structural engineer who has had a hand in several pro sports stadiums.
In Minnesota, lawmakers scoffed at bids to have the public kick in toward a retractable roof on a $1 billion Vikings stadium being built in downtown Minneapolis, particularly given the cold climate. Team owners decided against paying for it themselves, and settled for a fixed roof and bank of glass windows on the side that will slide open to let fresh air in.
A USD1.4 billion stadium being built by the Atlanta Falcons to replace the 23-year-old Georgia Dome has a retractable roof, but the team is picking up most of the cost for the project.
The roof dilemma for the Arizona stadium is complicated by the vast swings in weather the Phoenix area sees over the course of a season. For the preseason and first month of the season, temperatures are in the unbearable range of 38 to 44 degrees, making it an easy call to close the roof. By season’s end, the temperature can dip into the low teens. In the middle of the season, the temperature is fabulous but fans on one side of the arena complain that the setting sun is too bright.
“For a quarter or more of the game you’re staring right in to the sun. And (fans) have frankly made us aware loud and clear that that’s not an optimal experience for them,” said Mark Dalton, vice president of media relations for the Cardinals. Josh Hoffner, Phoenix , AP