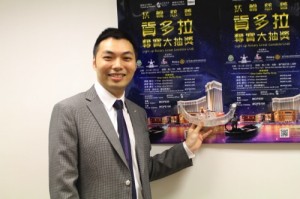 The Rotary Club of Macau has launched a charity raffle promotion to help three local associations supporting children with special needs. The campaign will feature an opening ceremony at The Venetian Macao on December 7, where 10,000 miniature gondolas will be lit up in the resort’s lagoon.
“Light up Rotary Great Gondola Grab Raffle Draw Promotion,” sponsored by Sands China Ltd., aims to sell 10,000 charitable raffle tickets, the proceeds of which will support the Concordia School for Special Education, the Macau Autism Association, and the Macau Down Syndrome Association. The funds will also be used to support the Guangxi Project for Education and Poverty Alleviation.
Rotary Club’s president, Kevin Lei, said that the organization chose these three associations because of the importance of education for children with special needs.
“This is crucial for the future of these children, and education services are particularly important when they’re aged between one and five years old,” he said.
Kevin Lei revealed that the Rotary Club of Macau hopes to raise at least MOP300,000 throughout the promotion that runs until December 7.
Each raffle ticket costs MOP50, while a set of three tickets sell for MOP100, the Rotary Club revealed in a press conference on Friday.
After deduction of the prize money, all ticket sales will go to charity. To attract the attention of local citizens, the raffle promotion will feature a ceremony at the Venetian Lagoon, with 10,000 miniature gondolas being lit up on December 7.
The first winner will be awarded MOP38,888; the second prize is MOP28,888; and the third is MOP18,888. There will be also 40 consolation prizes worth over MOP30,000, with an overall prize value of MOP110,000.
The raffle draw tickets can be purchased through Kong Seng Macau Ticketing Offices, which also supports the raffle. Macau Daily Times is the campaign’s media partner. The Rotary Club of Macau was founded in 1947. Over the years, it has focused on supporting education services for children with special needs.