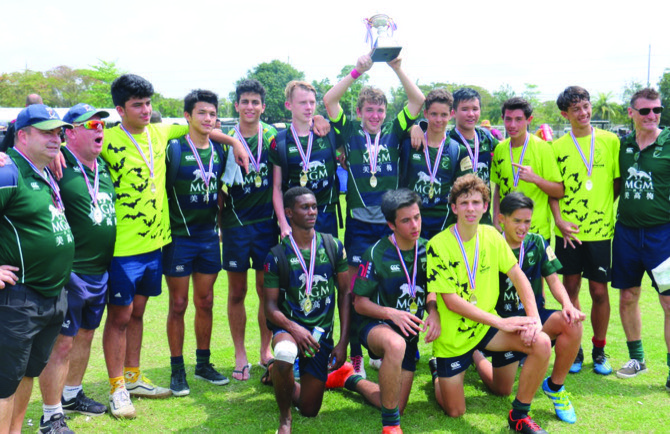 LOCAL rugby team Macau Bats recently participated in the Bangkok International 10s, a leading regional competition. This was the second year that the club played in the competition and fielded four teams at the U10/12/14 and 16 age groups.

The tournament is one of the most popular in Asia and attracted teams from Malaysia, Singapore, Sri Lanka, Hong Kong, Indonesia and Russia, in addition to Thailand. The tournament was played over last weekend.

The U10 team got off to a winning start against local team Nak Suu by 2 tries to nil. They then met old foes Sai Kung Stingrays from Hong Kong and went down 2-5 before drawing 2-2 against Bangkok Lions. The Bats then played very well against Singapore Centaurs but lost out to a stronger team. This led to a Plate final against the Stingrays who once again came out on top against the Bats despite the team’s best efforts. Finishing Plate runner-up was a good effort for this young group.

The U12s had two pool victories against Jakarta Komodos and Bangkok Lions before a 2-2 draw with Kuala Lumpur Tigers set up a tense final pool match against Sai Kung Stingrays with the winner to play in the Cup final. This proved to be one of the best games of the weekend, truly “a final before the final.” The Stingrays scored first, however the Bats fought back playing good infield rugby before switching the play and making use of the wings. Having equalized, the Bats let their concentration drop and the Stingrays quickly regained the lead. Once again Macau fought back and got a second try before finally losing a last minute score to give the Stingrays a 3-2 win. This resulted in the Bats playing Enisei, from Russia, in the Bowl final. This was another tense affair with both teams defences initially on top. Macau broke through and established a 2-0 lead, however Enisei hit back with a try of their own to make it 2-1 at half-time. Macau defended well against the Russian team and ran in a further two tries to secure a 4-1 victory and come away as Bowl winners.

The U14s had a slow start to the competition, going down heavily to KL Tigers before bouncing back with wins over Nak Suu (10-5), Jakarta (17-0) and Omnoi (20-0). This put Macau into the Plate final against KL Cobras who proved to be the stronger team running out 17-0 winners. Despite the loss the Bats had done well to get to the final after their less than ideal opening to the tournament.

The U16s found themselves in a strong pool and lost a very tight opening game against Bangkok Lions by 7-0. This was a game where Macau had the opportunity to take at least a draw from the game. Next up was KL Cobras who quickly ran up a 14-0 lead, although the Bats hit back and finished the game the stronger, the Cobras won by 21-7. The third match was a fiery encounter with KL Tigers that saw Macau score one of the best tries of the weekend to take an early lead. The KL team were strong but brought a lot of ”niggle” into the game which saw the referee issue two yellow cards and gave a warning to both teams at half-time to control their tackling. However, shortly into the second half a high tackle from the Tigers saw the temperature rise and the referee red carded a player from each team to restore order. TheTigers won the game by 21-7.

The Bats then had two games against strong Singaporean teams. Despite losing both games, Centaurs (0-17) and Dragons (7-10) the Macau team acquitted themselves well and were unfortunate not to take at least a draw from one of the matches. This then put the Bats in the Bowl final and a re-match with Bangkok Lions. Again the game was a tight initial affair with the Bats finding space hard to find – this was in no small way due to the Lions having 11 players on the park until the situation was pointed out to the referee and the game resumed to 10 v 10. Macau then started to play its running game and led by 7-0 at the interval. Another two tries were scored to put Macau in control before the Lions scored a consolation try to make the final score 21-7. Thus the U16s were able to replicate the U12s achievement and bring the Bowl back to Macau.

It was a tired but happy Macau Bats contingent that boarded the flight back to Macau, Plate runners-up in U10 and U14 plus Bowl winners in the U12 and U16. Donald Shaw, BangkokSpecial to MDT 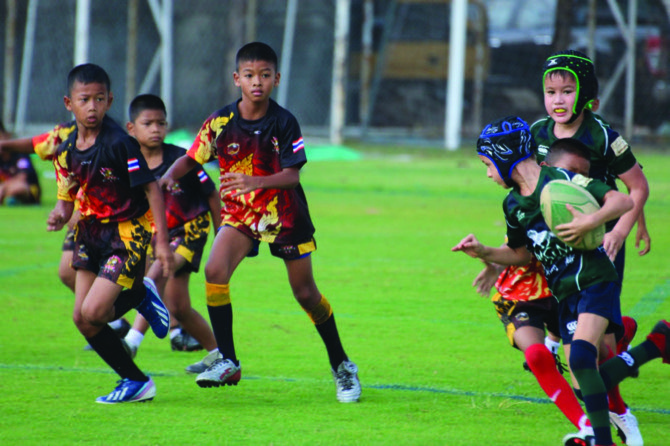 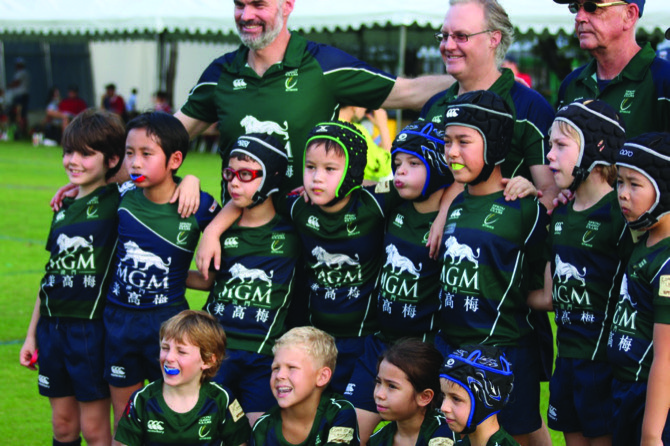 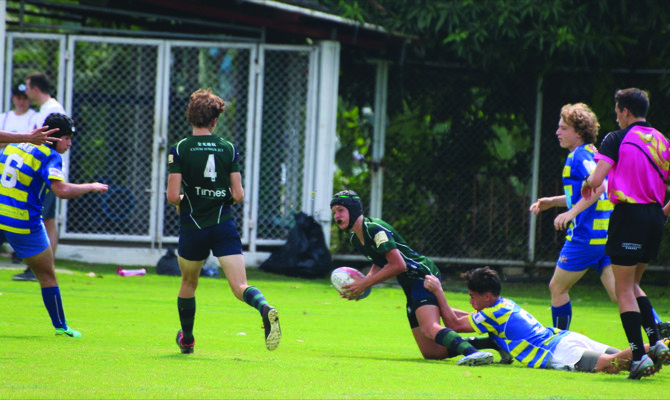 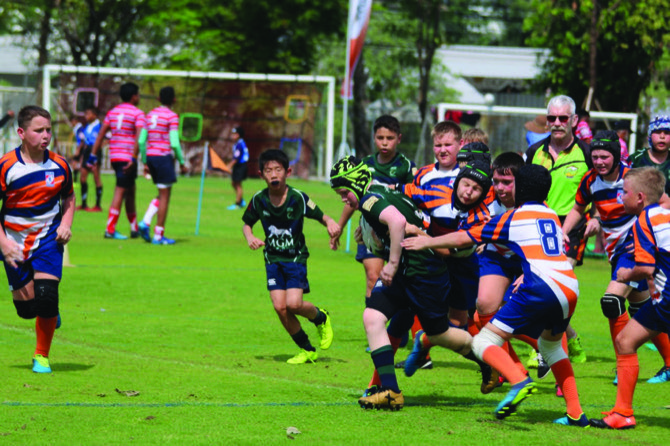 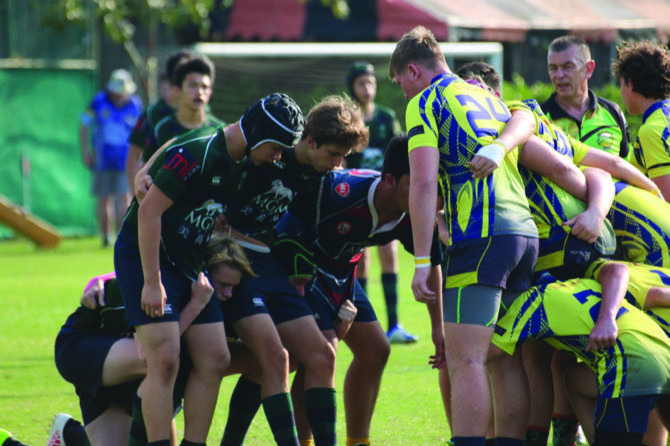 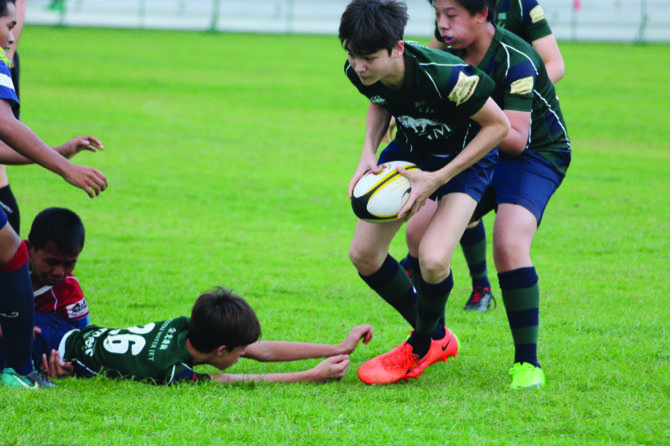