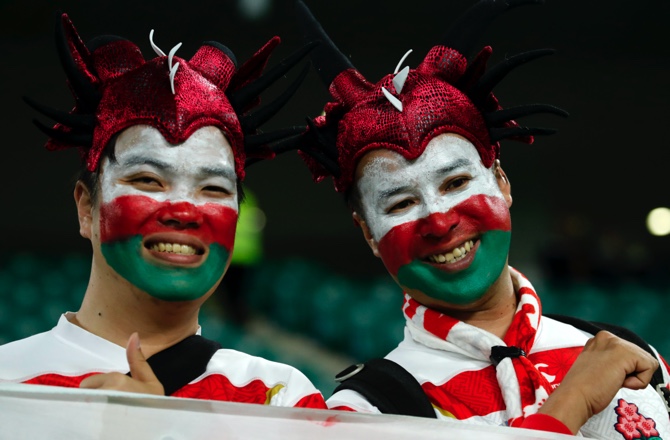 A group of Wales fans laughed and smiled broadly while posing for a photo with South African referee Jaco Peyper after their team scraped into the Rugby World Cup semifinals.

Peyper, perhaps unwisely, was holding his right elbow horizontally and into the face of one of the supporters — seemingly mimicking the key incident in Wales’ comeback 20-19 win over France on Sunday when French lock Sebastian Vahaamahina was sent off for violent play.

Peyper also had a big grin on his face. It will certainly be no laughing matter in France, or possibly for World Rugby when the governing body sees the image, taken by a French journalist, which was being shared widely on social media on Monday.

World Rugby said it was aware of the picture and “it would be inappropriate to comment further while we are establishing the facts.”

Wales’ performance wasn’t anything to celebrate, either.

OK, the Welsh are through to the last four for only the third time. And OK, they showed again that never-say-die attitude which Warren Gatland seems to have instilled in his players in the final months of his 12-year tenure.

But those Welsh fans joking around in that picture with Peyper will likely have had their heads in their hands during what was one of their teams’ most anemic displays for some time.

“We need to be a lot better than we were in this game,” Wales fullback Liam Williams said, looking ahead to the semifinal match against South Africa in Yokohama on Sunday.

His teammate, George North, acknowledged it was too close for comfort for Wales. Gatland was even more blunt, saying that “the better team lost” and that he had been starting to think about what he’d say to the media if Wales lost.

The Dragons lacked fire. They played straight-forward rugby, but it was ineffective and ponderous, missing any snap or bite. The French dominated the exchanges, had more penetration to their attacking play, and basically threw away the game in a way only they can.

The Welsh do not have the same squad depth as the other three semifinalists — England, New Zealand and the Springboks — and it might be starting to tell.

What they do have, though, is plenty of heart. And that happy knack of getting the job done. A team that tended to fall short in the close games now seems to have forgotten how to lose. AP