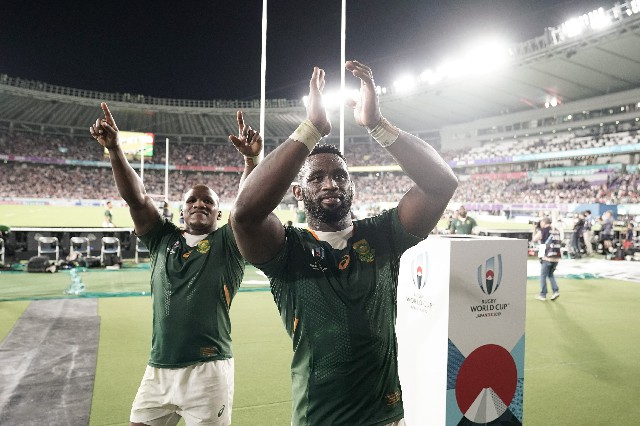 After finishing off the home team’s remarkable run at the Rugby World Cup in the quarterfinals, the Springboks are feeling more comfortable about taking on Wales in Japan.
Assistant coach Matthew Proudfoot says they’re just more comfortable, anyway, now that they’re playing the South African way.
The South Africans have lost their last four tests against Wales, but three of those were in Cardiff and the other in Washington, D.C., and Proudfoot said they were “juggling teams” because of the nature of those tours to Britain and time of year.
Now South Africa has a fully fit 31-man squad to select from, and is well prepared after arriving in Japan early last month.
“That really bodes well for us — we’ve got the team we want,” Proudfoot said. “We are on a neutral ground.”
And, they’ve reverted to playing the kind of rugby that made the Springboks famous. The big forwards are pounding away in the set pieces and at the breakdowns. Tactical kicking is a key part of the arsenal, along with taking penalty goals at every opportunity. The backline concentrates on the percentage plays, and the defense is holding firm.
South Africa advanced to the semifinals for the fifth time in seven World Cups with a 26-3 win over Japan last Sunday, scoring 21 unanswered points in the second half to avenge the shocking defeat to Japan in the so-called Miracle of Brighton four years ago.
Japan had topped Pool A with wins over Ireland and Scotland, had unprecedented support at home and had quickly become the sentimental favorites for rugby fans around the world.
But the Springboks weathered all that at Tokyo Stadium, despite conceding 70% percent of the possession and territory in the first half, and eventually nullified Japan’s hyper-energy, spread-the-ball wide game plan with a brutal, straight forward game.
A driving maul from almost halfway set scrumhalf Faf de Klerk en route to a try in the 66th minute that ended any chance of a comeback by Japan.
It was vintage Springboks rugby, helped by having an eight-man reserves bench stacked with six forwards.
“It’s not that we go out there with a blunt plan and hammer away, but we have a specific plan,” Proudfoot said when asked if the Springboks would load up on the heavy armory again against Wales. “I am very happy with the way the guys have handled those challenges.”
South Africa had only lost one test to Wales in 108 years before a 12-6 defeat at Cardiff in November 2014.
The Springboks rebounded from that with a quarterfinal win over the Welsh at the 2015 World Cup, but have lost all four meetings since then.
Proudfoot said there’d been a different mentality since Rassie Erasmus joined as director of coaching last year.
The South Africans won the Rugby Championship, including a 16-16 draw against the All Blacks in Wellington, and hadn’t lost a game in 2019 until a 23-13 loss to New Zealand in the Pool B opener.
After conceding two tries in four minutes in an otherwise tight encounter with the All Blacks, the Springboks have only conceded one try in four games. JOHN PYE, TOKYO, AP