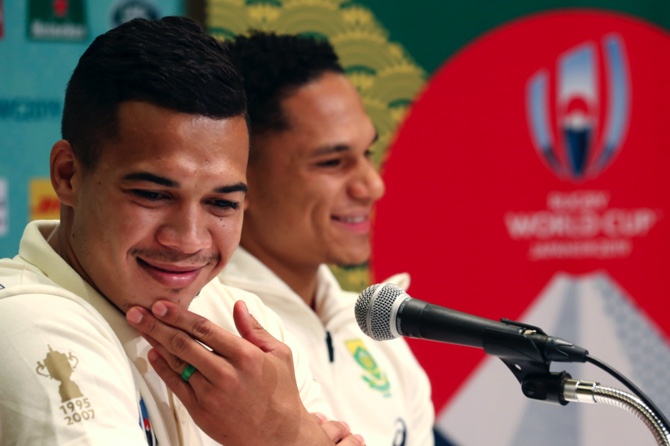 Cheslin Kolbe got a real kick out of watching Kenki Fukuoka and Katoro Matsushima burn off the Scottish defenders last weekend. Now the Springboks winger wants to show the Japanese flyers what he can do with the ball in a bit of space.

In an age when big, powerful players are all pervasive, the diminutive South Africa and Japanese wings have been a breath of fresh air at the World Cup.

The territory gained and the attacking threats posed by these dynamic outside backs have compelled their teammates to spread the ball wide in a bid to beat tight defenses on the fringes rather than constantly battering away in the middle.

“There’s a saying going around that dynamite comes in small packages,” said Kolbe, who has overcome an ankle injury and is raring to go in Sunday’s quarterfinal at Tokyo Stadium. “We all have something special we can contribute to our teams. Both Japanese wingers are playing phenomenal rugby, and that is what we have to do for our national teams.

“For me, it’s about giving as much momentum as possible for our forwards to keep going on the front foot.”

Kolbe will likely be marking Fukuoka in a match getting plenty of hype following Japan’s massive 34-32 upset win over South Africa in their previous World Cup meeting in 2015 at Brighton, England.

“He’s got a lot of speed, is really powerful and explosive,” said Kolbe, who is 1.75 meters tall and weighs 74 kilograms. “It’s going to be an exciting challenge.”

Fukuoka has scored 25 tries in 37 tests, including a pair against Scotland at Yokohama in a win that sealed Japan’s spot in the quarterfinals for the first time. He also scored Japan’s only try after going on as a replacement in an upset win over Ireland.

Fukuoka, who is the same height as Kolbe but weighs 83 kilograms, also set up Matsushima’s opening five-pointer against the Scots with a strong burst and stunning offload on the left flank. He stripped a Scottish player of the ball and sprinted away to score the try three minutes after halftime that sealed the bonus point and ultimately the victory for Japan.

Fukuoka’s 110 meters of running were more than double Scotland’s Chris Harris, who carried the ball further than anyone on his team with 49 meters.

He’s had his ups and downs in terms of selections — the only game he started at the 2015 World Cup was a loss to Scotland, and he was derided for a woeful defensive performance against the U.S. in 2014 — but he’s a crowd favorite in Japan and has scored four tries already in the tournament.

Matsushima, who was born in South Africa to Japanese parents, has scored 22 tries in 38 tests and played in the win over South Africa in Brighton four years ago. The 1.78 meter, 87-kilogram speedster scored a hat-trick of tries in Japan’s tournament-opening win over Russia, and the opener against Scotland.

Until Japan’s 4-0 run in the group stage here, the so-called Miracle of Brighton was a career highlight for him.

This game will be different. Nobody can say the Japan squad has snuck up on anyone in the first Rugby World Cup staged in Asia.

Wins over an Irish team that was ranked No. 1 before the tournament and an undefeated group-stage run capped with a 28-21 win over Scotland have put Japan firmly among the top eight teams at the World Cup.

South Africa had a 41-7 win over Japan in a warm-up match on Sept. 6 at Kumagaya, with Kolbe scoring two tries, and the Springboks were hoping that would bury memories of the famous defeat.

“Knowing we had the 2015 loss to Japan — I wouldn’t say it’s stuck in our head, but we know it happened,” Kolbe said. “But it’s four years later and a new opportunity for us.”

The South Africans came off second-best against the defending champion New Zealand All Blacks in the Pool B opener, and had to settle for second spot in the group. They were probably preparing for a quarterfinal against Ireland, but Kolbe said they’re ready for anything.

The Springboks have the more seasoned pack, and will be trying to outmuscle Japan across the field in a bid to smother the fast-and-furious game plan that has worked so well so far for the tournament hosts.

“Japan are playing exciting rugby — they’re giving the ball a lot of air, and want to stretch your defensive structures,” Kolbe said. “It’s a style I love to play as well.

“But we have our own structures and plan we want to implement, especially this weekend, and cut down their options to force them into some structure.” JOHN PYE, TOKYO, AP