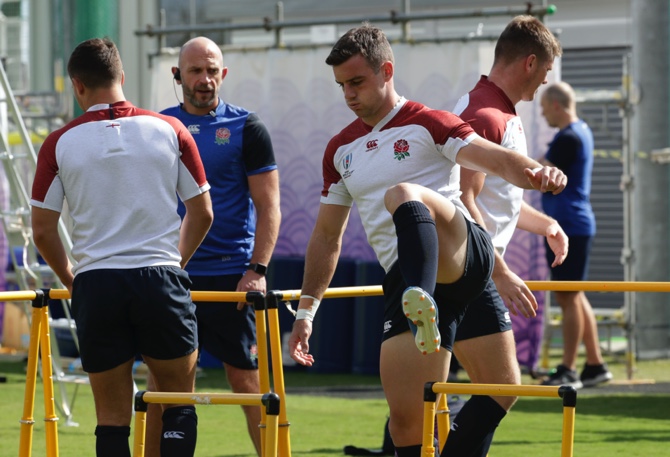 Undercooked or fresh for the challenge ahead? That’s the question hovering around England.

As for Australia, the main issue is this: Can a team known for pulling out a big performance when it matters reverse the course of recent history?

No one can say with any real confidence how Saturday’s quarterfinal match at the Rugby World Cup will turn out in the latest chapter of one of sport’s great international rivalries.

Quite simply, there are too many unknowns.

England arrived at the tournament with concerns about the team’s mental fragility, prompting the hiring of a psychologist. Now the worries are as much about their physical shape.

The World Cup hasn’t really got going for the 2003 champion, with low-key run-outs against Tonga and the United States followed by what pretty much ended up being a walkover against an Argentina lineup reduced to 14 men for almost an hour. The last pool-stage game, against France, was canceled because of Typhoon Hagibis.

So what state will the English really be in after two weeks without a match? Can they suddenly switch into battle mode against the old enemy?

“The way we train is to mimic games,” added teammate Elliot Daly.

England, with its pent-up frustration, could just as easily explode out of the blocks in Oita, or gradually shrug off the rust and grow into the game.

Australia is another mystery.

There are no worries over whether the Wallabies are battle-hardened, after a pool stage where they opened with tough matches against Fiji and Wales before finishing with a typically physical test against Georgia.

The concern is whether they can pull out a run of three big displays to win the World Cup for a record-tying third time. Results over this World Cup cycle suggest otherwise and the team has only impressed in patches this tournament, summing up the second half of Michael Cheika’s five-year tenure. There’s also uncertainty about the lineup, with 19-year-old Jordan Petaia getting a start in the centers in a big selection gamble from Cheika. England rearranged its midield, too. Flyhalf George Ford was benched, with Owen Farrell moving into 10, Manu Tuilagi moving in one to inside center and Henry Slade starting at No. 13 as England reverted to its Six Nations formation.

“It’s going to be a big step up and we’re ready,” Australia fly-half Christian Leali’ifano.

One of the highlights of Cheika’s time in charge was the 33-13 win over England in the pool stage at the 2015 World Cup that contributed to the host nation getting eliminated, in unprecedented fashion, before the knockout stage. Australia went on to reach the final, losing to New Zealand.

Since then, the Wallabies have lost six straight tests against England, starting with a historic 3-0 sweep in a series in Australia in 2016. The following three defeats came at Twickenham, in autumn tests in 2016-18.

All of those wins were masterminded by England’s Australian coach, Eddie Jones — someone Cheika knows well from their days together at storied Sydney club Randwick.

Jones was hired by England, at huge cost, to lead the recovery from the debacle of the 2015 World Cup. Getting out of the pool stage in Japan was step one. Now for the biggest game of his England reign, one he will ultimately be judged on.

It just happens to be against his country of birth.

“It is a great opportunity for us to regenerate, refocus and put a bit more petrol in the tank, so we’re really happy with it,” Jones has said about England’s two-week unintended break, during the squad headed south to its beach-front training base in Miyazaki.

This will be the rivals’ seventh meeting at a World Cup, and their third at the quarterfinal stage after 1995 and 2007. It was in that 2007 match where the English prevailed primarily because of their dominance in the scrum and it is always a department that provokes plenty of scrutiny in this matchup.

Australia appears, though, to have shored up its scrum, coping well against Wales and Georgia over the past month.

“Although we do cop a lot of the rap for it,” Australia prop Scott Sio said, “we understand as a group that if we are all firing together, that’s what makes a successful scrum.”