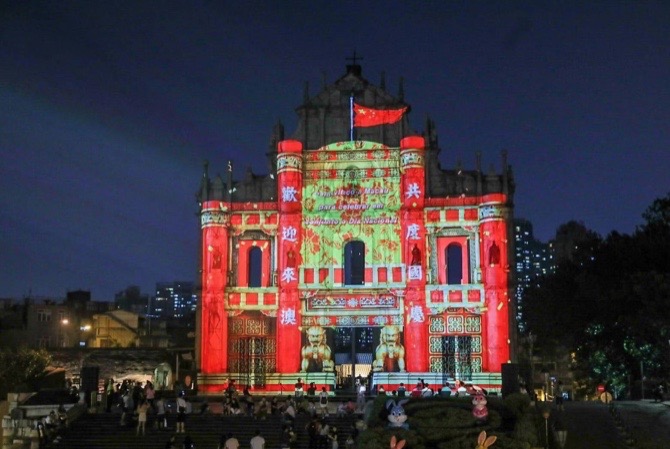 The Catholic Diocese of Macau has expressed its disappointment over the projection of political symbols on the façade of the Ruins of St. Paul’s in celebration of the 70th anniversary of China’s establishment. The Diocese said the projection was disrespectful of the heritage site’s religious significance.

The Macao Government Tourism Office (MGTO) organized a three-day mapping show for three nights beginning last Sunday, with the projection of images onto the façade of Ruins of St Paul’s.

However, the show has provoked a reaction from the Diocese, which believes that the heritage site has been misused by the government.

According to the Diocese’s chancellor, Rev. Cyril Jerome Law, although the façade is no longer church property, it remains a symbol of the Catholic faith in Macau.

“[The] faithful of different nationalities have deep feelings towards and a sense of identity with it,” said the chancellor in a statement.

“The show in question evoked reactions of discontent from quite a number of faithful of different nationalities, since it is deemed that the use of the historical monuments ought to correspond to its intended character,” Rev. Law added.

As the façade of St Paul’s represents the profound and long- standing Catholic heritage of Macau, the Diocese proposed that, should there be other mapping shows to be held in the future, their content would do well to be related to the religious context of the monument.

Rev. Law said that the Diocese is willing to engage in dialogue and to exchange ideas with relevant agencies, in the common endeavor to “preserve and promote the precious historical monuments of Macau.”

Meanwhile, MGTO said in a reply yesterday to the Times’ query that it is aware of the matter and is willing to hold a dialogue with the concerned entities, including the Diocese of Macau.

“So that in the future whenever there are video mapping shows planned for the Ruins of St Paul’s or other location, its content can be discussed and adjusted,” the bureau said in a statement.

MGTO also argued that, for the last few years, the bureau had used different iconic locations and historical buildings, such as the façade of the Ruins of St Paul’s, to conduct video mapping shows. These shows were held during the Macao Light Festival, projecting different themes, stories and images, such as east-meets-west architecture, gastronomy or Santa Claus.

“This time, the video mapping show was in celebration of the 70th anniversary of the founding of the People’s Republic of China, hence the theme, storyline and related images aimed to suit the occasion,” it concluded.

Mixed sentiments were expressed on social media platforms, with some netizens arguing that the show had insulted both religion and culture.

“From the fact that many foreign places no longer welcome tourists from mainland China due to their lack of respect to others’ way of living, we can tell what the problem with their education is. They only know everything they have comes from their Party. [They think] they can take anything from others and don’t need to respect others,” said one.

However, others defended the projection, saying that such similar mapping shows have been ongoing for the past few years as part of MGTO’s festive events.