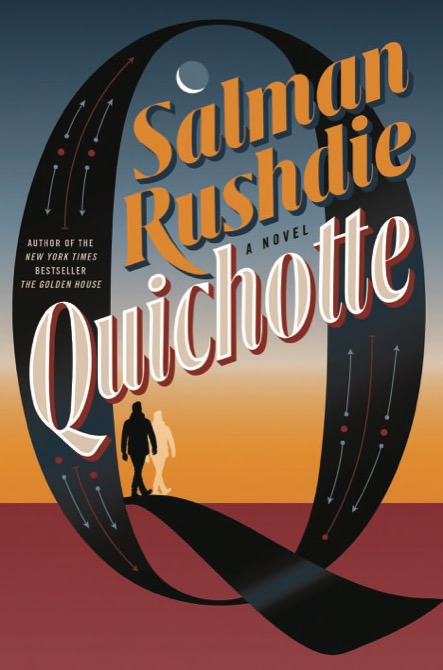 Good news! You don’t have to read Cervantes’ masterwork to enjoy Salman Rushdie’s modern reinvention. You’ll probably pick up on hundreds of additional references and inside jokes if you have, but Rushdie has created something that feels wholly original even if you’ve never heard of the hopelessly romantic Spanish knight-errant who sees danger in windmills.

It does help to have an open mind, however. Rushdie’s so-called “magical realism” (that’s lit-crit for “making stuff up in an otherwise mostly real setting”) is on full display here. There are mastodons in New Jersey, a talking cricket (“you can call me Jiminy”) and even Oprah Winfrey has a legitimate talk-show competitor.

Throughout it all Rushdie serves up his hallmark social criticism. Quichotte is introduced as a 70-year-old man of “retreating mental powers” suffering from brain damage caused by watching too much television. He lives in the present, or what Rushdie calls the age of “Anything-Can-Happen,” a time when it “was no longer possible to predict the weather, or the likelihood of war, or the outcome of elections.” Miss Salma R. is addicted to painkillers and Quichotte was a traveling pharmaceutical salesman before embarking on his quest.

Rushdie even gives Quichotte his own Sancho, dreamed to life while witnessing the Perseids meteor shower near Devils Tower in Wyoming. As in Cervantes’ novel, Sancho is the pragmatist to his father’s idealist.

The book is crammed with pop culture references like that. He may be partly satirizing America’s obsession with celebrities, but there’s no doubt that Rushdie has paid attention to the trend. Sancho again, this time in an inner monologue: “A zillion channels and nothing to hold them together. Garbage out there, and great stuff out there, too, and they both coexist at the same level of reality, both give off the same air of authority. How’s a young person supposed to tell them apart? … Every show on every network tells you the same thing: based upon a true story. … the true story is there’s no true story anymore.”

Lucky for us, there are true storytellers and Rushdie is near the top of that list. Rob Merrill, AP