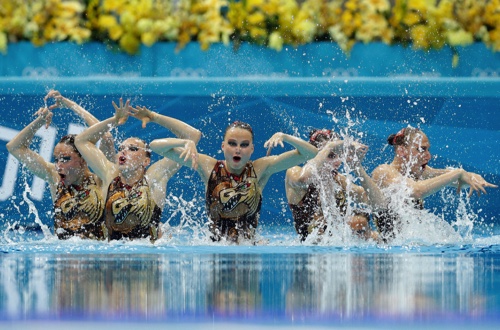 Synchronized swimmers are celebrities in Russia, young women glorified as much for their looks as for their collection of Olympic medals. Now, they’ll have to get used to sharing the limelight with men.
Swimming world governing body FINA voted last weekend to introduce mixed-gender duets to synchronized competitions. Not everyone is happy about it in Russia, the sport’s undisputed superpower.
“I’d probably have decided against it. I wouldn’t have approved this issue,” Angelika Timanina, an Olympic champion in 2012 and eight-time world champion with Russia’s national team, told The Associated Press. “We’re used to classical synchronized swimming, feminine synchronized swimming.”
FINA’s decision — made at its congress in Doha, Qatar — did not set a timetable for introducing mixed-gender synchronized swimming and synchronized diving at major international championships, such as the Olympics and world championships.
With Russia hosting next year’s world aquatics championships in Kazan in July, it’s possible the events will be included in the schedule there.
Synchronized swimming should be “a purely feminine sport” and introducing mixed competition is “mistaken,” Sports Minister Vitaly Mutko told Russian agency R-Sport. He even hinted that the introduction of mixed duets was the result of pressure from Russia’s rivals.
“Evidently, some kind of group of countries has pushed this through,” he said.
Approval of mix-gender competition was welcomed by the sport’s governing body in the United States.
“I feel that this event can be a strength for the USA,” USA Synchro executive director Kevin Warner said. “I was told that our organization proposed this event several years ago, so we are very excited to have the opportunity to showcase one of our strengths to the world.”
Until now, male synchronized swimmers have been forced to stage their own competitions away from the official FINA schedule or to perform at non-competitive shows. Many male swimmers, such as those competing in the men’s group discipline, remain out in the cold.
Including mixed-gender events could threaten Russia’s total dominance of a sport in which it has won every available Olympic gold medal this century. It also challenges gender roles in a country whose government has made a point of promoting images of traditional masculinity.
Olympic 100-meter butterfly silver medalist Evgeny Korotyshkin told Russian media last month that he might “cry” at the sight of a male synchronized swimmer’s “hairy legs poking out of the pool.”
However, Elena Markoch, a coach who has trained several of Russia’s Olympic champions, said Russians will eventually warm to male synchronized swimmers with the passion currently shown to the country’s male figure skating stars.
Just as with pairs skating, a synchronized swimming duet can show “the relationship between a man and a woman, expressed through the music, through the movement,” she said.
Russia’s state-backed training system is a production line for female synchronized swimming stars, but has so far produced just one elite-level male synchronized swimmer, 17-year-old Alexander Maltsev.
“He’s very strong and really loves synchronized swimming,” said Timanina, who has trained alongside him. “He tried it out of curiosity and he really liked it. It turned out that he’s a worthy athlete.”
Maltsev took up the sport when he was 10 — elite-level Russian female swimmers often start as early as 6 — and moved from St. Petersburg to Moscow to train with otherwise all-female groups. With his partner Anna Petrishcheva, he is Russia’s most likely future contender for a gold medal at a major championship.
If he succeeds, Maltsev could even persuade Russians to look beyond synchro’s sequins and take the sport more seriously, Markoch said.
“That young man is expressing his optimism, his desire to work and he’s showing that it really is a sport, because synchronized swimming isn’t some theater show,” she said. “Of course there are sports that are classically male and classically female, so at the start it’s like: ‘How can a woman play football? How can a woman play hockey?’
“There’s bewilderment and shock, but then people can get used to anything.” James Ellingworth, Moscow, AP