Samsung billionaire heir to cede board seat before bribery probe 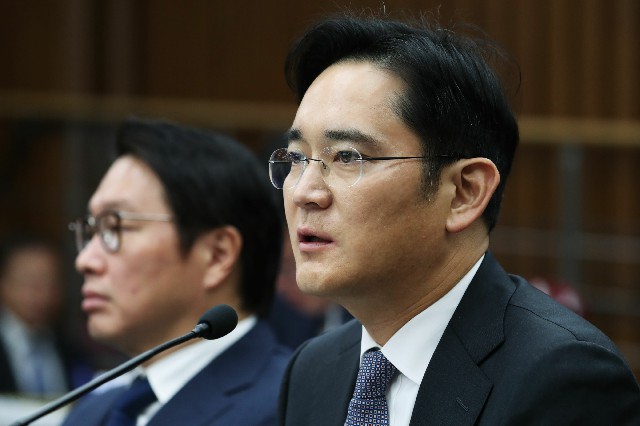 Samsung Electronics Co.’s de facto leader, Jay Y. Lee, plans to give up his board seat after his directorship expires late October as he prepares for another trial over alleged bribery, a person familiar with the matter said.
The billionaire heir won’t seek to extend his three-year term on the board of the tech behemoth when it ends Oct. 26, but will remain at the helm of the world’s largest chip and smartphone maker, the person said, asking not to be named because of the sensitivity of the issue. Lee will instead continue to run Samsung Electronics with the title of vice chairman though its board will stay central to overall management, the person added.
The 51-year-old is putting some distance between himself and Korea’s largest conglomerate ahead of a re-trial over bribery charges that could land him back in jail. He faces additional allegations in a landmark case that inflamed popular anger over the chaebols that control the country’s economy and helped bring down former president Park Geun-hye. Lee may be pre-empting a backlash over his re-seeking a board position – which requires shareholder approval – while contesting a months-long legal case.
When Lee joined the board in 2016, it was deemed a symbolic move to step out from under the shadow of his ailing father and consolidate his power over Samsung. His ascension was intended to shore up his position as a leader who drives strategic initiatives such as mergers and acquisitions.
Yet months later, Lee’s fortunes reversed. Caught up in a nationwide scandal, Lee spent about a year in prison battling accusations that he offered horses and funds to a confidante of then-president Park in return for support of a 2015 merger that cemented his control over the Samsung group.
Since his release in 2018, Lee has been busily re-cultivating an image as the face of successful Korean business. He joined President Moon Jae-in on visits to India and Pyongyang, and expanded his network via meetings with financier Mohammed bin Salman and Indian tycoon Mukesh Ambani.
The only son of Chairman Lee Kun-hee will remain Samsung’s overseer for the time being, grappling with a laundry list of tasks including steering Samsung through a severe industry downturn. The company’s operating income fell more than 50% in the September quarter, though that was less of a decline than anticipated.
As Lee has stressed in a series of press releases, the company needs to continue to invest in future businesses such as logic chips and even sixth-generation mobile networks to overcome growing uncertainty. Sohee Kim, Bloomberg