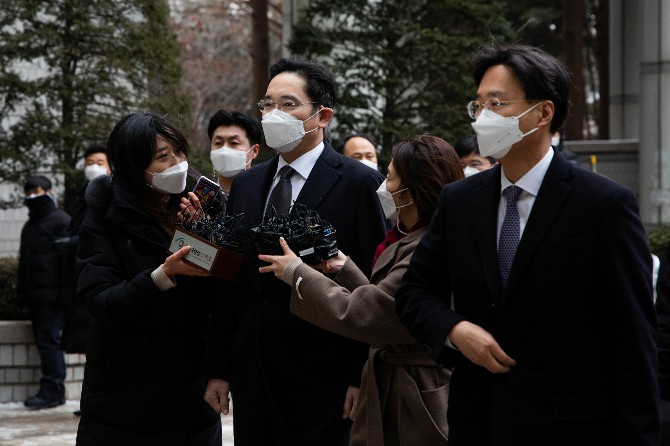 Samsung Electronics Co. heir Jay Y. Lee was sentenced to 30 months in prison over bribery charges, a dramatic setback for the world’s biggest electronics company as it tries to move beyond a years-long scandal that inflamed outrage over the cozy relationships between government and business.
The Seoul High Court first jailed Lee in 2017 after convicting the billionaire for his role in a corruption scandal that toppled former South Korean president Park Geun-hye. The Samsung Group’s de facto leader served a year in prison, but was released in February 2018 after his original five-year term was cut in half and suspended. The Supreme Court overturned that verdict and ordered a retrial in 2019. Monday’s sentencing, the result of that retrial, sends the top decision maker at the country’s most valuable company back to jail at a time of rising competition and global uncertainty.
In the dispute, Lee, 52, was accused of offering horses and other payments to a friend of the former president to win support for his formal succession at the corporation. The Supreme Court upheld a 20-year prison term for Park last week, citing wide-ranging charges including bribery related to Samsung. Lee still faces a second prosecution related to succession.
“This is shocking news for Samsung, but Samsung should wrap up this legal wrangling and move forward,” said Chae Yi-bai, a former South Korean lawmaker who has worked at a non-profit shareholder activist organization. “Since Lee already spent one year in prison, there will be one and a half years of a leadership vacuum.”
Shares of Samsung Electronics fell 3.4% after the sentencing. An attorney for Lee called the decision “regrettable.” Samsung Electronics declined to comment on the outcome.
Any void in leadership presents risks for the world’s largest producer of memory chips, smartphones and consumer appliances as it deals with the Covid-19 pandemic, tumultuous U.S.-China relations and intensifying competition in mobile devices and semiconductors. While Samsung’s daily business is run by an army of managers, Lee’s absence may stall or complicate larger investments or strategic longer-term moves. The executive has played an active role at the company, frequently joining government-related and public events after he was released from the prison. Sohee Kim, Bloomberg