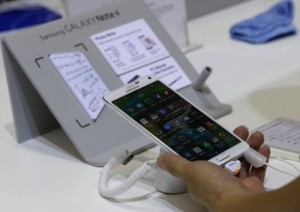 The latest version of Samsung’s popular big-screen Galaxy Note has gone on sale at a crucial time for the South Korean company as it suffers a rapid decline in profit from its global smartphone business.
With the Note 4 launch in the U.S. last week, Samsung introduced one of the biggest design changes to the Note series since it started sales three years ago, ditching plastic in favor of metal for its frame.
The choice is not a result of a change in the company’s design policy, but a product of what Samsung does well: identifying the consumer trend and improving upon it. Yet it’s unclear if that’s enough to stanch sliding sales as the holiday shopping period nears.
By the end of 2013, Samsung had sold at least 48 million Galaxy Notes. The company would not reveal more recent sales figures. Even though reviews for the Galaxy Note 4 have been favorable, analysts said its redesign may not be enough as Apple Inc. has entered the large-screen smartphone category with the iPhone 6 Plus.
“It will not be easy,” said Lee Sei-chul, an analyst at Woori Investment & Securities. The Note 4 “is a nice product but response to the iPhone 6 Plus has been good. “
Samsung estimated earlier this month that its July-September quarterly profit shrank to 4.1 trillion won (USD3.8 billion), a 60 percent plunge from record-high 10.2 trillion won a year earlier. Samsung is scheduled to disclose earnings for business divisions later this month and analysts believe profit from its mobile business plunged to about one third of its level a year earlier.
Samsung’s first Note in 2011 is credited with making big-screen smartphones popular, especially in Asia, but the “phablet” market has become crowded with rival models since then. The Note 4 with its 5.7-inch screen faces competition not only from the new iPhone 6 series, but also from Chinese handset makers.
Samsung designers and developers said the opinions of consumers and their demands drove the design changes from plastic to metal. Youkyung Lee, Technology Writer, Seoul, AP