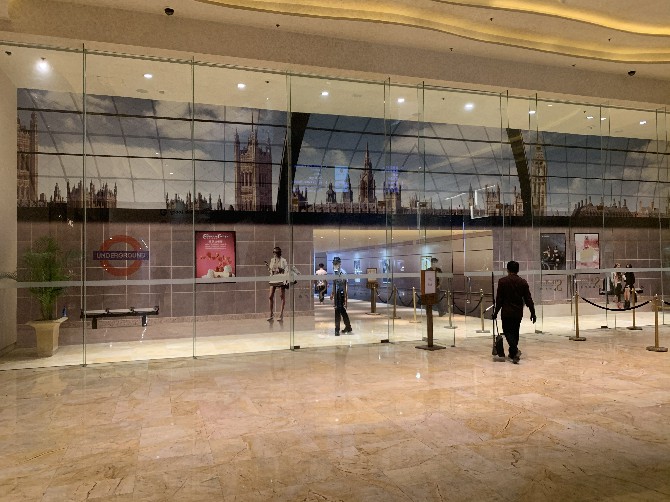 Inside the under-development Londoner Macao project, seen earlier this month

Sands China is continuing with its investment in the SAR despite the economic fallout from Covid-19. The casino operator is aiming to finish its USD2.2 billion project by the end of next year.
The Londoner Macao is scheduled to open progressively in 2020 and 2021. The Holiday Inn Macao Cotai Central will be converted to The Londoner Hotel and will feature 594 rooms, and property’s apartments arm will open with 368 units.
In a recent interview with Chinese-language newspaper Macao Daily News, the President of Sands China, Wilfred Wong, said that construction for the project has not slowed down.
The construction work and investment have continued despite the decline in the city’s gross gaming revenue. Gaming revenue plunged 97% year-on-year to 754 million patacas last month.
But for Wong, the SAR’s development is a marathon.
In February, Wong said that the group is proceeding with the construction of The Londoner as planned. He noted that they had implemented the relevant procedures, such as giving foreign workers 14 days to quarantine before they resume work.
During the peak of the pandemic in the first two months of the year, construction in Macau slowed down. This was likely connected to the measures of the SAR government, which required all non-resident workers from the mainland quarantine for 14 days when entering the territory.
Some gaming operators have admitted to a slowdown in the pace of construction due to the low number of construction workers arriving from mainland China.
Separately, Wong also remarked that the expansion of the Four Seasons Hotel has already been completed.
The general manager of Four Seasons Hotel Macao, Kris Kaminsky, previously told the Times that the second tower of the hotel will be an all-suite product.
The project has been designed as a home and residential product instead of a hotel product. The hotel has 290 suites with areas of between 2,000 and 4,700 square feet.