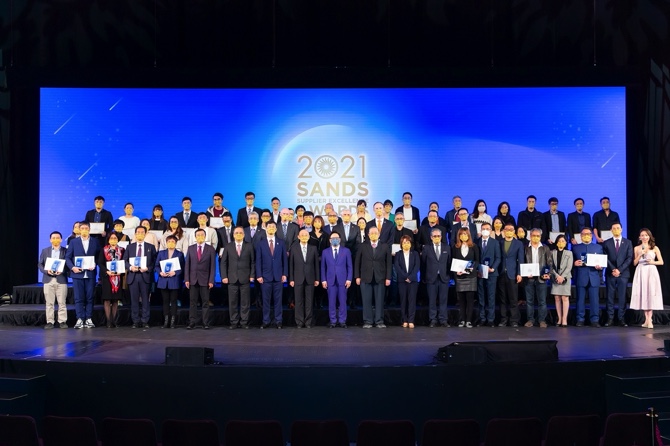 Sands China Ltd. recently honoured some of its outstanding suppliers, recognized local SMEs graduating from its procurement training programme, and launched a book highlighting the success stories of its local SME suppliers.

“Sands China is very pleased to again recognise the outstanding services and products provided by our many suppliers, whose collaboration is essential for us to provide the world-class experience our integrated resorts are known for,” said Wilfred Wong, president of Sands China Ltd.

“As Macau continues to carry on in the face of an ongoing pandemic, we are grateful for the continued cooperation of our suppliers, whether small or large, local or international,” he added.

Held at The Londoner Macao, the company hosted the 2021 Sands Supplier Excellence Awards, the 10th Sands Procurement Academy Graduation, and the launch of a new SME book recording the milestones of the company’s local SME support programme since 2015.

It is Sands China’s 9th year holding the Sands Supplier Excellence Awards, acknowledging the cooperation and services of some of the company’s most noteworthy suppliers. This year’s ceremony recognised nine winners across six categories.

During the graduation ceremony for the Sands Procurement Academy, the company recognised 52 local SMEs, including 16 exhibitors from the 2021 Sands Shopping Carnival. Nearly 370 suppliers have enrolled in the academy since its founding in 2017, and 330 have graduated to date, including the recent group.

After initially targeting a few key categories of local suppliers, Sands China said that the academy has been open to all local SMEs in Macau since 2019.

The company also recalled that despite the pandemic’s effect on the city’s economy and tourism, it has exerted efforts to keep local procurement uninterrupted. LV