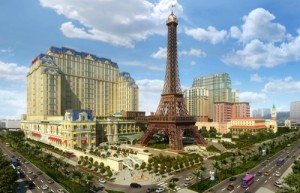 An artist’s rendition of the project

Las Vegas Sands Corp has announced that the company’s majority-­owned subsidiary, Sands China Ltd., has received the Macau government approvals needed to complete the construction of its USD2.7 billion Paris-themed integrated resort.
According to a press release issued by LVS, “the completion of The Parisian Macao will bring Las Vegas Sands’ total investment in Macau to more than $10 billion with the vast majority of that investment spent building, among other things, expansive retail malls, convention and exhibition spaces and thousands of hotel rooms”.
“Our investment has provided tens of thousands of new jobs in areas such as retail, entertainment and hotel operations. We’ve enabled local companies and suppliers to expand their businesses and we’ve helped the government expand its tax base and diversify its economy. The Parisian Macao is 100 percent consistent with that vision and we look forward to families taking pictures in front of our Eiffel Tower in the near future,” said Las Vegas Sands and Sands China Ltd. chairman Sheldon G. Adelson.
The Parisian Macao will feature more than 3,000 hotel rooms and suites, more than 490,000 square feet of retail space, diverse food and beverage offerings, new meeting and convention facilities and a 50 percent scale replica of the Eiffel Tower.