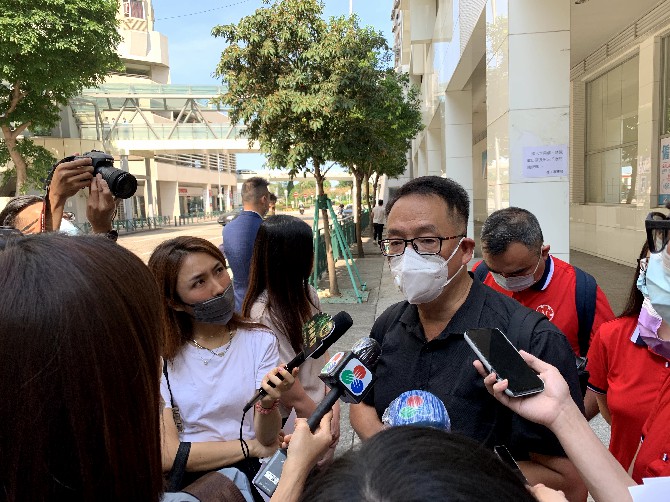 Mr. Vu, one of the employees forced to relocate to StarWorld casino in August 2020

It has been alleged that Casino Rio, a satellite casino under the Galaxy Entertainment Group, willfully put a group of long-serving local employees into a tight corner at work, intending to pressure them into resigning, the New Macau Gaming Staff Rights Association stated yesterday.
The strong-arm tactic the casino allegedly exploited was to relocate the employees, most over the age of 40 and having served over a decade at the surveillance department at Casino Rio, to two casinos at Star World Hotel and Galaxy Hotel without offering any training to help them acclimatize to new working procedures.
Yesterday afternoon, Cloee Chao, the president of the Association, together with some individuals involved in this tactic, delivered a petition letter to the Labour Affairs Bureau (DSAL) and urged the authority to address the problem.
Chao regarded the move by Casino Rio as “unacceptable,” and suspected that its underlying intention was to pressure the staff to resign so that they could shirk the obligation to outlaying employees’ severance payments before the renewal of casino license.
A total of 12 employees were transposed to new posts without choice. Among them, 11 resigned, Mr. Vu, one of the employees forced to relocate to StarWorld casino in August 2020.
“We were forced to work in much bigger and more skill-demanding casinos without being given any proper training. But whenever we made a mistake, we received a warning letter from the management, who stressed that we would be dismissed after receiving three warnings,” Vu said while addressing the press yesterday.
Putting the staff in tough working environments without giving them any coaching and showing them no mercy on their mistakes is no different from putting them in the hot seat, Vu said.
Staff at the surveillance department are responsible for monitoring areas at casinos to catch any illegal acts carried out by guests or others.
Compared to Casino Rio, which only has several surveillance systems, each casino at Star World Hotel or Galaxy Hotel has more than 20 surveillance systems and larger floor areas — which were completely new to the relocated employees, requiring time for Vu and his former colleagues to memorize and learn.
The total amount of the severance payment the casino is obliged to pay a long-serving staff member before the renewal of the casino license is estimated to be around MOP250,000, Vu said.
Since 2019, the 12 concerned staff, all Macau residents, were relocated in batches to other casinos. No bluecard holders were involved. It is said that the casino is planning to relocate another batch from the surveillance department this coming September, Vu said.
The casino surveillance department is a comparatively small team with fewer staff. By targeting them, the casino would receive the least complaints, Chao believed.
Macau’s satellite casinos, despite being under the name of casino licensees, are individual entities with independent operation. Considering the period of renewal for casino licenses is approaching, the association expressed concerns that other satellite casinos may turn to similar ploys to coerce their staff to resign.
Vu disclosed to the Times that he resigned in September last year.