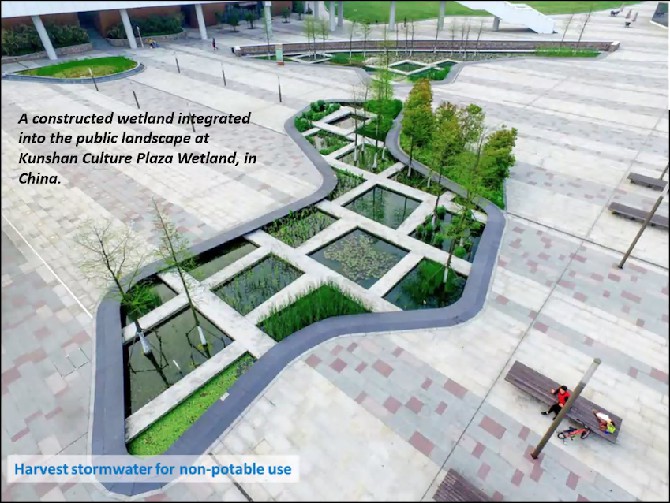 The increase of the impermeability of our cities and its influence on the habitat fragmentation and degradation of the ecosystems was the topic of a talk hosted by the University of Saint Joseph (USJ) yesterday evening.
The talk, hosted online by professor Cristina Calheiros, a researcher at the Interdisciplinary Centre of Marine and Environmental Research (CIIMAR) at the University of Porto and a collaborator at USJ’s Institute of Science and Environment, addressed the problems created by the impermeabilization of soils in our cities. She highlighted that available solutions call for a return of the city’s natural environments and their valuable service in combating impermeability.
According to the professor, Nature-based Solutions (NBS) can be implemented to bring back nature into the cities. These solutions would not just be “ornamental” but would have great value as services provided by nature to the people, and also have an important economic outcome as they are provided (virtually) for free.
“We need to share our space with vegetation and to take the best benefits from it. Work together with nature, that’s the biggest challenge,” Calheiros said during the presentation, adding that the purpose of NBS is to “mimic natural processes through engineered solutions.”
One of the concepts presented at the talk was of “Green infrastructure,” a broad concept which refers to an NBS that addresses green corridors, green roofs, energy saving, water management solutions and much more.
Addressing the idea of aligning our cities to be more balanced with nature, Calheiros said “To bring back nature to cities does not mean to change cities completely as they already exist and they are like living beings. What we need to do is to combine and integrate green infrastructures into the existing ones,” she said, giving the example of using rain gardens to store and reuse storm waters.
To those aiming to engage with NBS projects to combat environmental issues and solve problems such as pollution, floods resulting from storms, and others, the scholar shares, “We won’t be able to reach a solution [for your problem] with one single project and NBS. We need to create a network with different solutions and replicate [these projects in more than one location] so we can see any effects. Only one application will likely not produce any significant impact.”
In this sense, citywide solutions involve establishing a multilayered system of green solutions (green roofs, green walls, and others at building level) combined with blue solutions, i.e. solutions at the street level such as tree trenches and roadside wetlands and ponds.
All the mentioned solutions and methods aim to achieve what is called a “sponge city,” a city capable of absorbing and reorganizing its water resources, canalizing them to certain storage areas when in excess and retrieving them when in shortage.
As Calheiros also mentioned, giving several examples, most of the NBS projects do not require a significant amount of space, and they can be applied to virtually any street or roadside in any city in the world.
“The keyword is to be creative, the existing solutions (NBS) are all possible to be implemented in terms of engineering and architecture. You just need to be creative on how to do that according to your goals and particular location,” she said. She also reaffirmed that in most cases the best solution would be to integrate several NBS systems, as “problems can arise from people trying to use only isolated solutions or incomplete solutions.” An instance would be like creating a pond or artificial wetland to improve water quality but not having a link that allows the transference of that water to other water reserve locations in case of excessive water, causing a flood.
In creating what Calheiros called “dynamic systems,” cities will not only be able to take advantage of their short-term solutions but also be prepared to face a mutation of the conditions that are happening due to long-term climate change, therefore being able to “provide different answers” from the same system, she explained, giving the example of several pilot experiments being carried out in several cities on the mainland.
“They use these sponge city [pilot projects] to both deal with too much water [during and after a storm] and, at the same time, to deal with water shortages in some other occasions,” she explained.
For the scholar, “Green Infrastructures act as a structuring element of the urban landscape by allowing connectivity between territories and helping to maintain the services provided by ecosystems, bringing several environmental, economic and social benefits,” and ultimately bringing sustainability to each of these three pillars.
“It promotes adaptation to the effects of climate change and contributes to the transition to a low carbon economy,” she concluded.
The talk was delivered within the context of the project “Nature-based solutions for a cleaner and safer Macao” implemented by the Institute of Science and Environment at USJ and supported by Clean the World Foundation and Las Vegas Sands.