Schooling gets his 9 gold at Southeast Asian Games 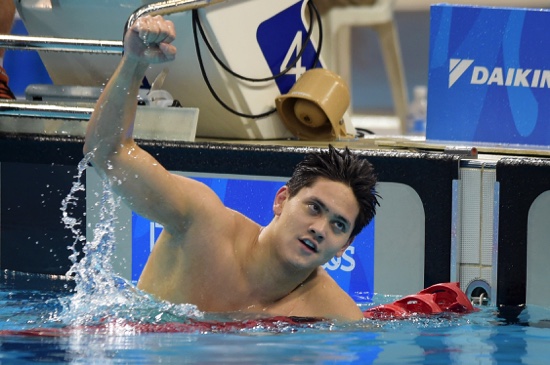 Joseph Schooling finished the Southeast Asian Games with nine gold medals from his nine events, justifying his pre-meet status as the star of the show in Singapore.
The Texas-based Schooling was appearing in a significant international swim meet in his home country for the first time, and he didn’t disappoint his millions of fans in the host nation.
When he entered the water for his butterfly leg of the 4×100-meters medley relay yesterday night — the last event of the swimming program — Singapore had a lead of 0.82 of a second. He increased that to 2.65 seconds when he hit the wall for his changeover with the freestyle swimmer, setting Singapore on course for another games record of 3 minutes, 38.25 seconds.
The women’s star of the pool was Nguyen Thi Anh Vien of Vietnam, who finished with eight gold medals, a silver and a bronze and closed with victory in the 200 breaststroke. Singapore veteran Tao Li won her fifth gold of the games with victory in the 100 butterfly, the last of the women’s events.
Thailand made up ground in track and field, winning five of the 12 finals on the third day of the competition, including both high hurdles. Tittidet Jamras win the men’s 110 in a meet record 13.69 seconds and Punsoongneun Wallapa taking the women’s title.
Vietnam won three of the track titles, including Duong Van Thai and Do Thi Thao’s victories in the men’s and women’s 1,500 titles.
Triyaningsih won the women’s SEA Games 10,000 title for the fifth time, and also completed a distance double after her victory in the 5,000.
She finished in in 33 minutes, 44.53 seconds, well clear of second-place Pham Thi Hue of Vietnam, who was running in bare feet — one of three shoeless runners in the race, including Vietnam teammate Hoang Thi Thanh and 35-year-old Pa Pa of Myanmar.
Triyaningshi won the 5,000-10,000 double in 2007, ‘09 and ‘11 — when she also won the marathon on home soil — and settled for a gold-silver combination in 2013.
In cycling, Robin Manullang won the men’s time trial for Indonesia and Marella Saramat won the women’s time trial for the Philippines. John Pye, Singapore, AP