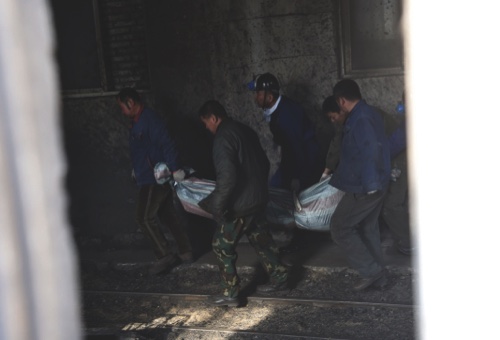 Rescuers carry the body of a victim from Hengda coal mine run by the state-owned Fuxin Coal Corp. in Fuxin, Liaoning province

At least 11 people were killed yesterday in the second deadly coal mine accident to hit China in two days, pointing to continuing safety issues in the industry despite a major decline in deaths among miners in recent years.
The official Xinhua News Agency said 19 people were working in a mine in the southern province of Guizhou when an explosion ripped through the shaft early in the morning. There was no immediate word on the condition of the eight survivors.
Xinhua said investigators are looking into the cause of the blast at the Songlin mine in the Guizhou town of Songhe. The mine’s phone number wasn’t listed and calls to government and work safety commission offices in Songhe, surrounding Pan county, and the nearby city of Liupanshui rang unanswered.
Yesterday’s blast follows an explosion and fire early Wednesday morning in the northeastern province of Liaoning in which 26 miners were killed.
Another 50 miners were injured in the disaster, which broke out in the complex run by the state-owned Fuxin Coal Corp. Of those, 30 had serious burns, eight were in intensive care and four were still in danger of dying. Despite the generally better safety reputation of state-owned mines, a number of deadly accidents have struck Fuxin’s mines in recent years, including a 2005 blast that killed 214 people.
China’s mines are the world’s deadliest, although a push to boost safety has considerably lowered death tolls in accidents. Just over 1,000 deaths in 604 coal mining accidents were reported in 2013, down from more than 6,000 per year a decade ago.
At the same time, demand for coal has plateaued as the Chinese economy decelerates from the headlong rush of the last decade. AP