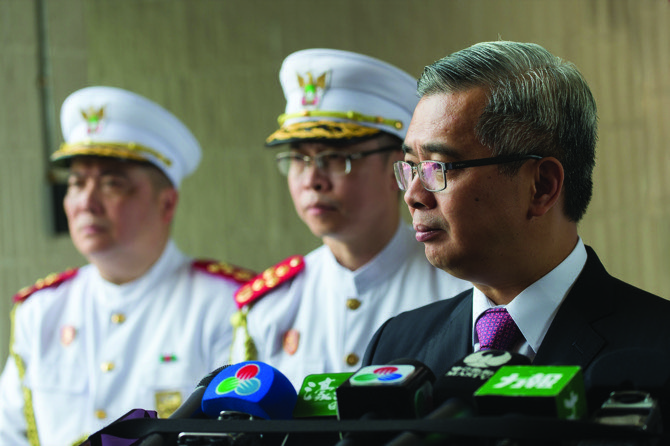 The security authority intends to expand the powers of both the security force and the security discipline inspection commission, according to Secretary for Security Wong Sio Chak, who announced the information on the sidelines of yesterday’s Hong Kong-Zhuhai- Macau Bridge Fire Services Station opening ceremony.

According to Wong, the security authority plans to provide assistance to the amendment of the Chief Executive dispatch, in order to authorize the expansion of the disciplinary body’s power.

Currently, the security force is studying whether there are any prohibitions to achieving this goal by establishing laws.

Expanding the disciplinary body’s power will allegedly improve management of discipline and allow it to be more focused when the government carries out supervision in the future.

Wong expressed that the plan will likely not be finished before Chief Executive Chui Sai On leaves his post, since the legislation involves some degree of complexity.

“It will probably be difficult to complete within this government. What we are doing currently is amending the Chief Executive dispatch so it can grant the disciplinary body more rights without amending the law,” said Wong.

Yesterday, the Judiciary Police (PJ) reported that one of its investigators was caught drink-  driving while on duty. The PJ has already initiated disciplinary procedures against the offender.

Commenting on the case, the Secretary noted that a total of 53 security force employees were reported to have been involved in disciplinary violations. There were 16 cases in 2017, 10 in 2018 and two cases so far in 2019.

Wong said that there has been a decrease in the number of violations. He also reiterated that the security authority is very strict and clear about disciplinary violations and will not tolerate them.

Aside from security matters, the Secretary also commented on what will happen to his position after the change of government later this year.

“As for myself, no matter where I go, I will spend all my efforts in any position,” declared Wong. “Since I took office in the security sector, all of my directors and my colleagues have been spending all their efforts to do a good job. The effect is obvious and has been endorsed by society. I have gained satisfaction and a sense of success. I also feel confident in future work. Regarding my position, it depends on the Chief Executive’s nomination and the appointment of the Central Government.”

Moreover, Wong spoke about the Qingmao Port, saying the authority has been continuously increasing manpower and will organize training in preparation for the opening of the port.

The port will be located right next to the Border Gate, in an effort to connect Zhuhai train station to Macau’s LRT Peninsula line, which is currently under construction.

The Fire Services Bureau’s (CB) Hong Kong-Zhuhai-Macau-Bridge fire services station was officially opened yesterday, to be staffed by a total of 75 stationed firefighters.

The station is tasked with handling fire incidents that occur along the bridge and is equipped with 12 fire service vehicles, including pump trucks, ambulances and rescue vehicles.

Hardware aside, the three regions’ governments have already reached an agreement regarding rescue arrangements.

According to Leong Iok Sam, director of the CB, the three governments agreed to handle the accidents based on the principle of administration authority.