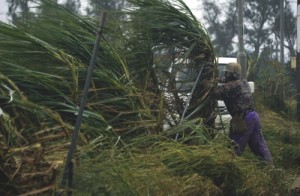 ANA Holdings Inc. and Japan Airlines Co., the nation’s two largest carriers, canceled more flights yesterday as typhoon winds disrupted travel for a second week.
Typhoon Vongfong prompted ANA to cancel 101 flights, affecting about 16,600 passengers, the airline said in a faxed statement. Japan Airlines halted 31 flights yesterday and three today, it said by fax. The storm turned northeast after crossing Okinawa, Japan’s southernmost prefecture, with winds gusting to 140 kilometers per hour, according to the U.S. Navy’s Joint Typhoon Warning Center.
The cancellations add to at least 229 flights that were scratched yesterday and more than 200 disrupted last week by Typhoon Phanfone. Vongfong is expected to make landfall on the southern main island of Kyushu tomorrow, then skirt the Pacific coast of Shikoku before moving inland through central Honshu, the JTWC forecast shows.
Okinawa Prefecture reported 23 injuries as of 7 a.m. in a statement on its website. Almost 210,000 people in about 90,000 homes were advised to evacuate, according to the prefecture. Okinawa Electric Power Co. reported 46,600 homes were without electricity as of 10 a.m.
Blackouts also affected Kyushu, with 54,700 homes having no power, Kyushu Electric Power Co. reported, while Kyushu Railway Co. halted bullet train service between Hakata and Kagoshima Chuo, according to its website.
Japan averaged more than 11 typhoons per year, most occurring between July and October, over the 30-year period ended in 2010, according to the Japan Meteorological Agency. Three airmen from a U.S. base in Okinawa were killed last week after being swept out to sea during Phanfone. By Craig Trudell and Emi Urabe, Bloomberg