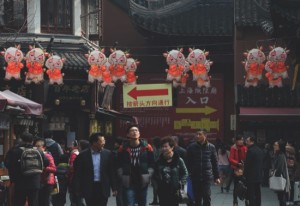 Officials have put the brakes on some popular Chinese New Year events in big cities in the wake of a deadly stampede in Shanghai last month, leaving some observers complaining of a dampened mood and a kill-joy bureaucracy.
Shanghai canceled its lantern festival at Yu Garden that draws up to 3 million people over the seven-day holiday, which this year starts today, the eve of the Lunar New Year. In Beijing, crowd-drawing karaoke has been yanked from a traditional temple fair, and authorities asked stores to notify police of any sales.
The safety measures are a response to the stampede at Shanghai’s glitzy riverfront in which 36 people were crushed to death on Dec. 31.
Shanghai resident and commentator Zhao Chu said cautious authorities are taking the easy way out to ensure safety “at the cost of folk customs and the desire of people to have some fun.”
Government officials are paid to provide public services, such as safety during holidays, but canceling events that were allowed in previous years shows their “capriciousness” and that they want a “worry-free” holiday, Beijing-based commentator Shi Shusi said.
“Can our government please grow up a little?” Shi said.
Shanghai’s annual lantern show at Yu Garden has been a city staple for Chinese New Year for the past 20 years. Last year, the event set a single-night record of 600,000 visitors. This year, it was called off along with smaller lantern shows at Fangta Park and Guyi Garden. A popular product expo was also scrapped.
Shanghai residents interviewed in local media say they understand the safety concerns, but lament that their holiday will feel less festive.
Shanghai’s Longhua Temple canceled a popular Money God ritual, and doubled the fee to offer incense and flowers on Chinese New Year’s Eve to 600 yuan (USD97) to control foot traffic.
In Beijing, one temple fair was called off, but the others will continue as usual with kitschy trinkets and food stalls. However, they will ditch the karaoke, limit attendees and permit fewer vendors so that there is more room for evacuations. Didi Tang, Beijing , AP