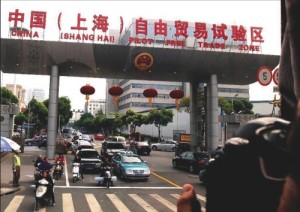 The most senior official of Shanghai’s free trade zone left his position weeks before the project’s first anniversary this month, the official Xinhua News Agency reported.
Dai Haibo “no longer holds” the positions of the zone’s executive deputy director and Communist Party chief, while remaining deputy secretary general of the Shanghai municipal government, Xinhua said. Dai, 52, was in charge of day-to-day operations and was party boss, making him the de facto top official of the zone.
Dai was suspected of disciplinary violations, the South China Morning Post reported yesterday, citing five people with knowledge of the matter that included Shanghai government officials. Corruption allegations may be related to positions Dai held before running the free trade area and it’s not known whether he would face further disciplinary action, the paper said.
A Shanghai government media official, who declined to identify herself, wouldn’t comment on the report when contacted by phone by Bloomberg News. The Shanghai discipline commission directed calls seeking comment to its information office number, which went unanswered.
Shanghai’s national-level free-trade zone, the first in mainland China, was set up as a testing ground for financial policies such as freer yuan convertibility and interest-rate liberalization. The zone was given a three-year mandate to conduct policy experiments and has introduced deregulations such as lifting the cap on foreign exchange deposits, cross-border yuan settlement,and offshore yuan loans.
The government broadened its initial list on foreign investment on July 1, allowing more companies to invest in such industries as technology for oil exploration, motorcycle production and property.
“The first-year ride was pretty bumpy and the project’s been moving with much difficulty,” said Cao Heping, director of the Department of Developmental Economy, in the School of Economics at Peking University. “The zone’s managers have been caught in a dilemma between great potential and great caution. So far they’ve been pretty risk-averse.”
The zone was launched with the hope that it can catalyze and drive China’s deeper financial reforms and can serve the role Shenzhen served more than thirty years ago as the vanguard of China’s economic opening-up. Gauging from the current development, it’ll take “longer-than-expected” for that promise to materialize, said Cao, who is also one of the six academic policy advisers the State Council consulted on the zone’s draft proposal three years ago.
“The authorities need to decentralize more financial decision-making power to the zone’s management team, but there was little progress on that front,” Cao said.
Dai’s departure is “good news” for the zone’s future, he said.
Dai was summoned by disciplinary authorities several weeks ago and was questioned about multiple properties he allegedly owned, the 21st Century Business Herald reported yesterday. His ex-wife had reported him several times to anti-graft officials, the paper said.
Chinese President Xi Jinping has been leading a crackdown on corruption by public officials since coming to power in November 2012. The Central Commission for Discipline Inspection, the Communist Party’s top graft-busting agency, dispatched its latest round of inspection teams on July 30 to more than a dozen provinces, municipalities and enterprises. The results of the inspection are expected to be released later this month.
The inspections included Shanghai, and Wang Qishan, head of the discipline commission, visited the financial hub last week, the South China Morning Post reported.
Dai made a public appearance Sept. 12 to chair a government meeting but his title as the free trade zone chief wasn’t used in state media reports. He took charge of the zone’s daily operations on Sept 30 last year.
Dai served as deputy party chief of the Pudong district between 2009 and 2012 and was also director in charge of the Shanghai economic and informationization committee between 2012 and 2013. Ting Shi, Bloomberg