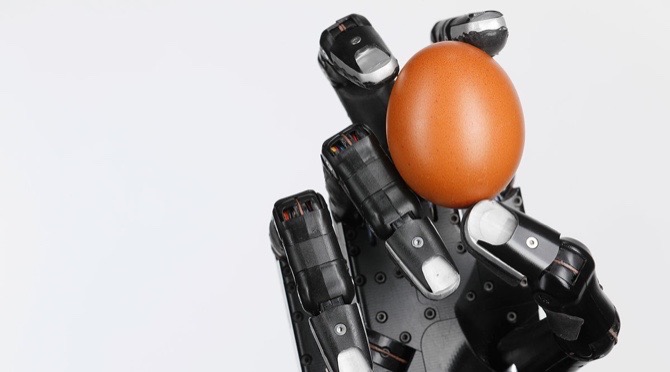 Chinese scientists have developed a chameleon- inspired soft robot with both color-changing and locomotion capabilities, offering a new perspective for future robot-environment interaction.

Soft Robotics is a subfield of robotics dealing with constructing robots from materials similar to those found in living organisms.

Intelligent actuators with the ability to interact with the environment have become an emerging topic.

Scientists from the Shenzhen Institutes of Advanced Technology, Chinese Academy of Sciences were inspired by chameleons, which can adjust their skin color to communicate and disguise during locomotion.

According to Du Xuemin, the leading researcher, chameleons adjust a lattice of light-reflecting nanoparticles in their upper layer of skin cells to adapt to the changing environment. By mimicking this mechanism, they developed a new material for creating actuators that can sense the changing environment and exhibit vivid color alterations.

Although similar materials have been developed before, the actuator shows faster color changes and longer endurance compared with previous prototypes, Du said.

Besides the color alteration, the actuator can perform programmable shape transformations. By mimicking the movements of snakes and earthworms, scientists designed a soft robot that can perform complex motions as well as change color instantaneously.

Scientists demonstrate the actuation processes of a rotating pinwheel and a flower with color changes, as well as a worm-like walker that can move forward straight and rhythmically with dynamic color changes.

Du said these actuators may provide inspiration for further development in various research fields, including sensors, robotics and smart systems.

“The color-changing material can be used as the skin of a humanoid robot. The face of the robot may turn red when it is shy or angry, which make it more lifelike and interactive,” Du said.

As a researcher dedicated to functional materials, Du has also developed several bio-inspired materials, including sensing and actuating materials that mimick the behavior of the plant mimosa. DB/Xinhua