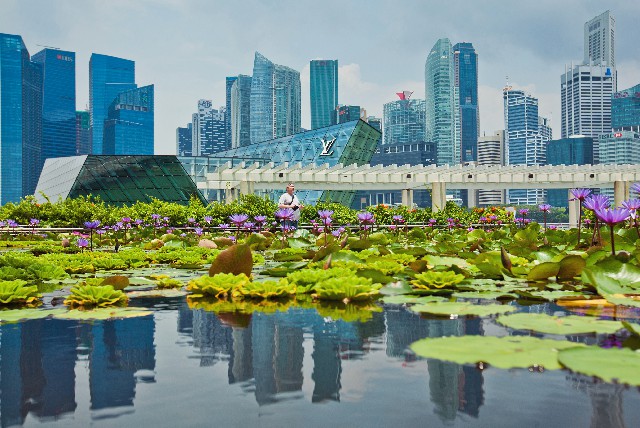 It may not be all doom and gloom for Singapore’s economy.
Recent data and anecdotal evidence suggest gross domestic product will probably grow in the third quarter after shrinking in the previous three months, according to economists including Chua Hak Bin at Maybank Kim Eng Research Pte. and Barnabas Gan at United Overseas Bank Ltd.
That would mean the city state will narrowly avoid a technical recession, commonly defined as two consecutive quarters of contraction.
Even so, there’s little to cheer about. Economists have slashed their 2019 growth forecasts for the export-reliant economy as the U.S.-China trade war intensifies. Singapore’s government is projecting growth of zero to 1% for the year.
Irvin Seah, a senior economist at DBS Group Holdings Ltd., said he isn’t optimistic about the country’s prospects even if the economy avoids a technical recession. He predicts expansion of just 0.7% for the full year.
Maybank cites three main reasons for the mild improvement, which it says should help boost Singapore’s services output and offset the slump in manufacturing:

Front-loading ordersBusinesses may be front-loading some orders before the U.S. slaps a 15% tariff on Chinese consumer goods, like mobile phones and laptops, in December. Also, there are signs that a slump in technology exports, which had been a drag on manufacturing, is starting to ease. Singapore’s July data reflected some of that rebound, with industrial production posting a far better performance than economists had predicted.

Loan growth
Singapore’s financial center is benefiting as more businesses finance their regional projects via lenders based in the city state. Offshore loans rose 7% in July from a year ago, while domestic lending grew 2%. The strongest growth in offshore loans was in construction and manufacturing, surging 18% and 15% respectively.

Hong Kong diversion
Protests and disruptions in Hong Kong have pushed leisure and business tourism to Singapore. Visitor arrivals grew 4% in July from a year ago, the fastest pace in 9 months, with hotel occupancy rising to 94%, the highest level ever for July, according to data from the Singapore Tourism Board. Despite a regional drop in Chinese tourists, Singapore-bound visitors from China rose 7.8% in July from a year ago, while tourists from the U.S. rose 17% and from Indonesia, 12%.
Singapore may benefit as more business events and conferences are diverted from Hong Kong, said Maybank, citing the Golden Wellness Summit planned for October, which was moved from Hong Kong to Singapore, and other events. Yongchang Chin, Bloomberg