Singapore | Office rent to gain most in four years 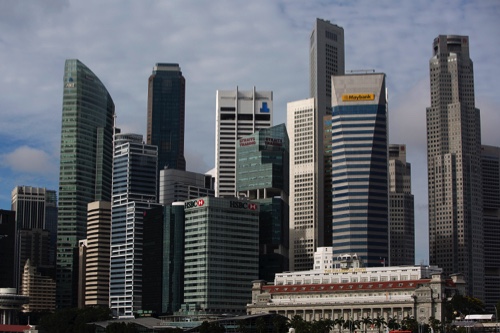 Commercial buildings stand in the central business district of Singapore

Singapore’s prime office rents are set to post their biggest increase in at least four years in 2014, and may extend gains this year in a supply-constrained market.
The office rent index for prime areas rose 8.7 percent in the first nine months of last year, heading for its largest gain since 2010, when it was up 12 percent, according to data from the Urban Redevelopment Authority.
A limited supply of new prime office space over the past two years, compared with demand from companies seeking central office locations, may push 2014’s rental increase as high as 14 percent, according to real estate broker Savills Plc. The same restricted supply will probably prevail this year and next, even if demand cools a little as the economy slows.
“Going into 2015, demand would almost match supply for prime office space, making the office market fundamentally sound,” said Alan Cheong, a Singapore-­based director at Savills. He said landlords are in a strong position to resist demands for lower rents due to the limited amount of new space available this year and next.
About 1.15 million square feet of new office space will come on stream in 2015, compared with 1.87 million square feet in 2014, said Alice Tan, the director of consultancy and research at real estate brokers Knight Frank LLP. Marina Bay Financial Centre, which held its grand opening in May 2013, has about 3 million square feet of office space in three towers.
Some landlords are pushing tenants to accept unusually long leases amid concerns that the large amount of new office space due to be completed two years from now will cause the market to soften.
Marina One, a development taking shape on reclaimed land in the downtown Marina Bay area, will alone add 2.2 million square feet of office space in 2017, boosting supply in that year to about 4.7 million square feet, according to Knight Frank. The property is being developed by a joint venture of the state- owned Temasek Holdings Pte and Malaysia’s Khazanah Nasional Bhd.
Instead of the traditional three-year lease for office space, landlords have responded to the extra supply in 2017 by asking for five- to six-year lease agreements to lock in today’s high prices, Tan said. Tenants are asking for discounts in exchange for agreeing to the longer leases, she said.
The rental index for office space in the central region rose to 192.3 at the end of September last year, up from 176.90 at the end of 2013 and the highest since the quarter ended December 2008, URA data showed. The index for the fourth quarter will be released later this month.
The buoyant rental market will continue to support the share prices of Singapore office real estate investment trusts this year, said Vikrant Pandey, an analyst with UOB Kay Hian Pte in Singapore.
Last year, Suntec Real Estate Investment Trust rose 27 percent, the second-best performer on the FTSE Strait Times Real Estate Invest Trust Index, which rose 9.2 percent, outpacing the 6.2 percent gain in the Singapore benchmark Straits Times Index. CapitaCommercial Trust, Mapletree Commercial Trust and Frasers Commercial Trust were among the 10 best performers on the REIT index last year.
The REIT index was little changed at the close of trading in Singapore today, while the Straits Times index fell 1.3 percent.
On the other hand, slower economic growth this year may cause prime office rental growth to slow to a range of 5 percent to 7 percent this year, Tan from Knight Frank said, as businesses become more cautious about taking on new space.
Singapore’s economy expanded less than economists estimated last quarter after its manufacturing industry weakened with slowing growth in China and an uneven global recovery. Gross domestic product rose an annualized 1.6 percent in the three months to Dec. 31 from the previous quarter, when it expanded 3.1 percent, the trade ministry said on Jan. 2.
The major leases agreed in 2014 included Sanofi-Aventis Group taking up 40,000 square feet of space in the new South Beach development, vacating its current office space at 6 Raffles Quay, according to Knight Frank. Sanofi didn’t respond to a request for comment on its new lease. South Beach is being developed by Singapore’s City Developments Ltd. and Malaysia’s IOI Group.
Companies operating in technology, media and telecommunications were especially active in renting prime space last year. LinkedIn Corp. doubled its office size by taking space at Marina Bay Financial Centre Tower 2, DTZ said. LinkedIn declined to comment on the details of its new lease. Pooja Thakur, Bloomberg